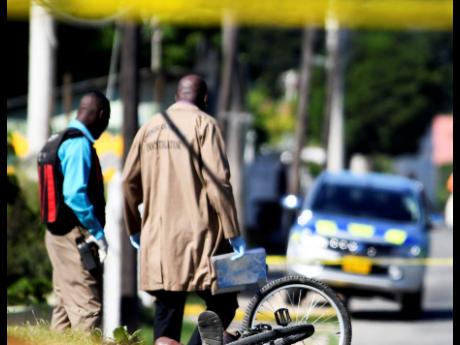 Residents along Deanery Road in St Andrew say they are angry at how police officers responded to the death of Trevor Beadle.

Beadle, who is called called Maestro, was reportedly riding his bicycle minutes after 7 a.m, when a man alighted from a vehicle and opened fire at him.

Residents are contending that officers were in the vicinity when the brazen attack took place, but they made no attempt to apprehend the murderers.

"Mi neva deh far because you know a school morning and we a carry the pickney dem go school. It was a white Probox, and one a the guy come out and him open fire pan Maestro pan the grung. The police a come and see all the operation, even when the bwoy run back inna the car. The bwoy dem bus out pan Mountain View Road and gone. The police dem come and stop a Maestro. Why him do that? Why dem never drive dung the man dem?" one resident said.

Residents have described Beadle as a family man who was well respected in the community.

"Residents said there has been an ongoing war between the Good Ridge Lane and Jacques Road communities, but the men were now taking the fight outside.

Commanding officer for East Kingston, Superintendent Victor Hamilton, said a curfew has been put in place in the area. He added that officers are aware of the rising crime statistics in the area and are prepared to go the extra mile until a sense of normalcy is returned

Despite the police presence in the area, residents are adamant that a new strategy to fight crime is needed.

"Why dem never put on him 'whaa whaa' (siren) and drive down the car? Mi not even sure dem did even write down the license plate number," an angry resident stated.

The residents later blocked the road to protest the killing.