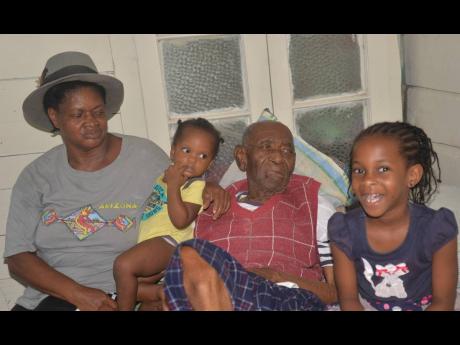 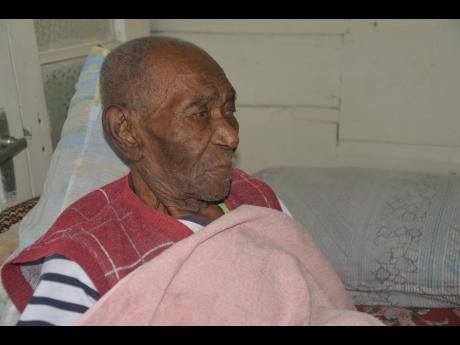 Charles Edward James, based on documents obtained from a ship on which he worked in the 1940s, is 114 years old, and could be the oldest man in the world.

James lives in Holly Hill in Westmoreland. Affectionately called Maas Tata, the super-centenarian is believed to have been born on February 3, 1905, in Darliston, Westmoreland.

If the birth certificate, which bears his name and that of his mother, Florence James, and other supporting documents that THE STAR obtained from members of his family are true, Maas Tata is 114 years and 10 months.

Faced with the reality that their patriarch could be the world's oldest man, Maas Tata's son, Fritz James, 85, and his grandson, Vernon Barrett, say they will embark on a quest to have his age verified.

"We have a birth certificate with his name and his mother's name that says he was born in 1905, but we have always had it that he was a little younger than that," Barrett said in an interview with THE STAR.

Maas Tata's birth certificate and a manifest were obtained from the SS David C. Shank, which made a voyage to Jamaica in 1943. Maas Tata would have been about 38 years old at the time.

"According to his marriage certificate, my grandfather in 1940 was 27 years old, which would suggest that he was born in 1913, and would be 106 this year," Barrett said.

"I don't know if there was an error in putting down his age on the marriage certificate so we are trying to get the help of the RGD to confirm," he added.

"I believe [I] am the oldest person in the entire Westmoreland," he told THE STAR. "I am not feeling any pain, but my body is weak and I feel cold at times."

Charles said he was married to Louise James and together they produced 10 children before she died at the age of 97.

Despite his age, Tata has a strong voice and is able to walk around with the aid of a walking stick. He is blessed with a good memory of his early years as a farmer, and his time living and working in England.