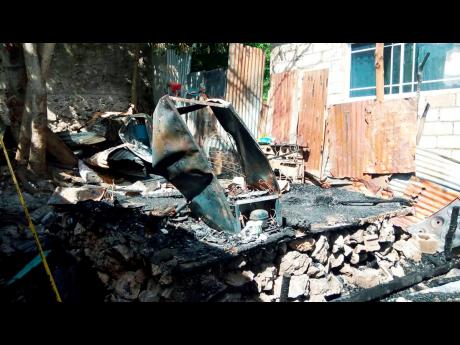 The house in Paradise where the four children were when the fire broke out Friday night.

The grandmother of the two children who were burnt to death in a fire last month says she is unable to come to terms with the loss.

Nuerine Wallace, 50, told THE STAR that since the incident, which took place in Norwood, St James, she has become so distraught that she is almost unable to function.

Her daughter, 28-year-old Shantel Brown the mother of the children, has been charged with neglect. She was recently given bail in the sum of $300,000 and has been living with Wallace since. Her two sons, eight-year-old Javanchi Lauderdale Palmer and one-year-old Tyler McLeod perished in the blaze. Two daughters, six-year-old Corey-Ann Palmer and Tyler's twin sister, Tailer McLeod, sustained injuries.

"I am now grieving in two ways. Because of losing two grandchildren at once, and my daughter Shantel arrested and charged in connection with their deaths," Wallace said.

Wallace said she has not received closure in the sudden loss of her grandkids as their bodies are yet to be handed over for burial. She added that officers have informed her that they are awaiting lab results from Kingston.

" I would not want my worst enemy to be in the position that I am in right now. I am in a dark world, I am financially drained, I am emotionally stressed, right now I am sitting down talking to you and my head feel like it's going to burst. I want my grandchildren to be buried. I cannot eat and cannot sleep at nights. I am a spiritual person and because of the two tragedies, I cannot even pray. My brain is shutting down," she cried.

Wallace, who is now also the guardian of the two other grandchildren who survived the fire, is pleading for assistance to cover the funeral expenses.

"I don't have a pay check, and don't know how the family will manage to cover the funeral expenses. In crisis such as these, persons are supposed to reach out and assist other people, because nobody knows what tomorrow will bring. We are living in a time where people must show love," she said.

In the meantime, Brown is scheduled to return to court in February.

The police report that on the night of the fire, a team of officers were on patrol in the community when they saw Brown and a group of persons "drinking and gallivanting" along the roadway, and instructed them to go home. The police said the team drove away and, about half an hour later, when they drove back to the same location, Brown and her group of friends had returned to the streets and were again drinking.

Some time after, an individual came to the scene, raising an alarm that Brown's house was on fire. When the police drove to the scene, the one-bedroom board dwelling was engulfed in flames, and firefighters were attempting to put out the blaze. Cory-Ann had managed to run from the blazing house, dragging her sister with her. The charred remains of Javanchi were found on a bed, while Tyler's burnt body was discovered underneath the bed.

Cory-Ann was treated and released and her one-year-old sister admitted in serious condition.

Anyone wishing to make a donation to the funeral expenses can contact the family at 876-836-5209.