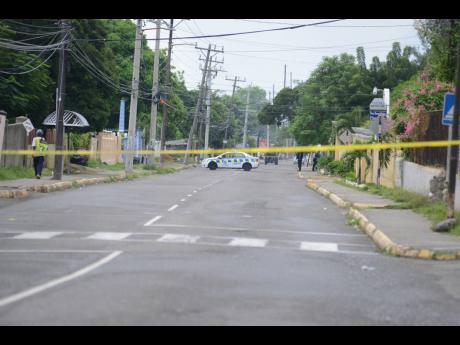 On the heels of another murder, residents of east Kingston are fearful that the bloodletting that is taking place will spill over into the Christmas holidays.

One resident told THE WEEKEND STAR that the season, which is used to spread cheer and joy, has turned to sorrow as residents are fearing for their lives.

"It seems like it is going to be a bloody Christmas," one resident of the Back Bush community told our news team.

According to an eye witness, a man was at a Supreme Ventures location along Mountain View road at about 11 a.m yesterday when men approached him and opened fire.

He was taken to the Kingston Public hospital, where he was pronounced dead.

"We are living in constant fear, and a the Christmas season ya now. As you look, another person a dead. Nutten nuh merry or happy bout wha a tek place now. Mi fraid. God know say mi fraid. Mi caan even get fi enjoy Christmas because dem a kill we off," another resident said.

She continued: "We nuh know how wi ago manage this season because a bare bloodshed. A bare war, and wi tiad a it. We want a peaceful Christmas. Wi wah fi be able fi go road and can come in back when we want. But to how the man dem a move, it look like wi affi go lock up inna wi house. This yah Christmas bloody bad. A one week left for Christmas, but wi nah go have no Christmas."

In the month of November, there were 11 murders in the East Kingston area alone.

Commanding officer of that division Superintendent Victor Hamilton recently told our news team that though there is a crime plan in place for the area, what is really needed is a "people plan".

"The amount of people in Jamaica who are predisposed to criminal activity and to gangs - they manufacture them more than how the police can recruit persons or the army can recruit persons. We have a crime plan, but we need a people plan. So we (the east Kingston police) go into communities with the HEART Trust group. [We recognised that] it is a predisposed mindset that they have which leads them to join gangs and all that, and it is frightening. There are programmes out there where people get paid to learn a trade, and they simply refuse to go there. They need to be exposed to opportunities from an early age," he said.

Despite the increase in crime in the area, Hamilton sought to assure residents that the police are there to help.

"We want to assure them that we are here for them, and their only salvation is to coorporate and give information to law enforcement," he said.