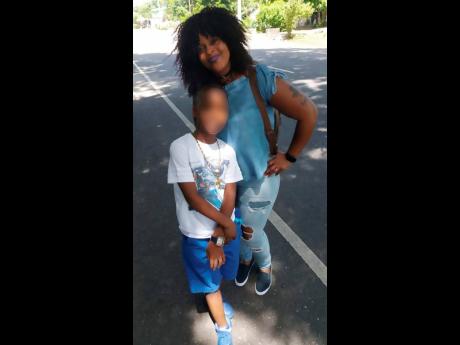 Laurajo Samuels snaps a quick picture with her foster son.

It was the love for children that caused Laurajo Samuels to become a foster mother.

She, along with other persons in Jamaica, have signed up for the 'take a child home for the holidays' programme offered by the Child Protection and Family Services Agency (CPFSA).

Samuels told THE STAR that eight years ago, her mother took home a two-year-old baby with whom she fell in love.

The child was taken a week later and placed in a foster home, and it broke her heart. A friend suggested the programme to her.

She accepted, and since then, the 45-year-old mother says that her home has been open for the past seven years to children who are in state care.

This year, Samuels is foster mother for a nine-year-old boy, but according to her, over the years, children from various homes go to her family for up to a week.

"I love children; I have a passion for children. I have fostered one child from he is two and he is now nine. I have two biological children. They are girls. They grew up with him, and we are a family. My girls love him, and he loves them. Everything fi dem about dem 'breda'. When my other daughter goes to buy stuff for her son, she is buying something for him (her foster son), too. When dem come in from work, they bring home things for their brother," the Dover, St Mary, resident said.

Leleith Gunter said that last year was the first time she took children home for the holidays and she was doing so again.

The mother of one said the experience of bringing home a 14- and 16-year-old last year was rewarding, and she would like to bring Christmas cheer to other children.

The Portmore, St Catherine resident said that she travels to her family home in Sandside, St Mary, to ensure that children experience a fun-filled Christmas.

"The experience was great last year. Just interacting with them, taking them to church, allowing them to participate in our Christmas programme at church was great. I have a love for children, and the fact that I could give back, I could not let that pass," she said.

"I will be taking two different children this year. I am looking forward to a greater experience to be with them and give them that kind of environment that children would look forward to this Christmas," she added.

The programme, which started more than 10 years ago, allows persons aged 25 and over to host a child or children for the Yuletide season.

The initiative emerged from the CPFSA's foster care programme, which the agency started to promote plans geared at family reintegration.

The holiday programme caters to children ages three to 18, particularly those who do not have parents or guardians to take them home for the holidays and who would otherwise be at the facility.