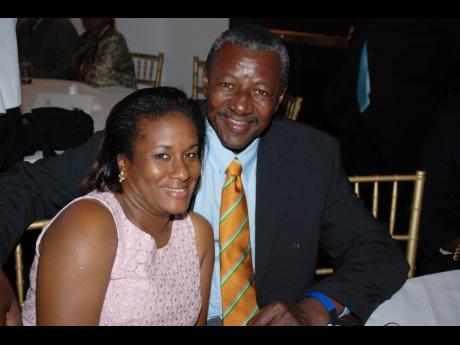 Steve Bucknor, and his wife Leonora.

For many of his 20 years as an international umpire, the demands of the job forced Steve Bucknor to spend most of the festive seasons away from his family.

"The umpiring kept me away from my family a lot of Christmases, but that is how it is," Bucknor told THE STAR.

"In my umpiring days, every Ashes in Australia, I spent Christmas in Melbourne for the Boxing Day Test. I also spent one Christmas in Cape Town, South Africa," he added.

Now that his days as an umpire are over, Bucknor has returned to his alma mater, Cornwall College. The former goalkeeper, who became a FIFA referee, now serves as coach of the school's daCosta Cup team.

Asked recently by THE STAR to recall the Christmas that he would never forget, Bucknor said that he couldn't quite put his fingers on one.

"I never really had exciting Christmases like some kids. I never had any means of getting this and that, so I couldn't enjoy Christmas like most people as a youth. I grew up with one single mother who worked almost every day, and I spent six days on the playfield," he said.

Bucknor, who received the Order of Jamaica in 2008, said that despite not having the best memories of Christmas as a youth, he has sought to ensure that the yultide season for his eight children is always memorable.

"My children are the ones who get Christmas from me. Every time I go away and come back, they get special Christmas money. Even now, if they are working or not, everyone gets. So those who are working, it's surplus," Bucknor said.

As the big day draws close, Bucknor is looking forward to Christmas dinner with the family at his Montego Bay, St James, home. It is one of the ways that he seeks to make up for his missing years at Christmas time.