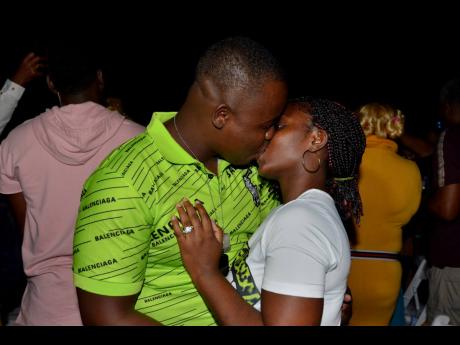 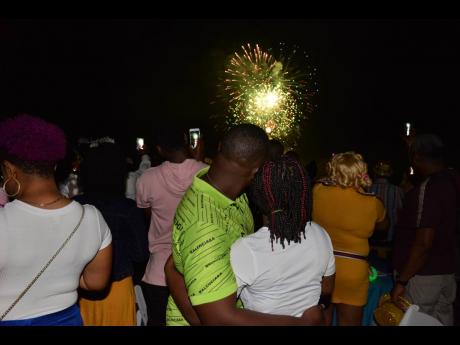 Narmeo and Tashana take in the fireworks after a spectacular marriage proposal. 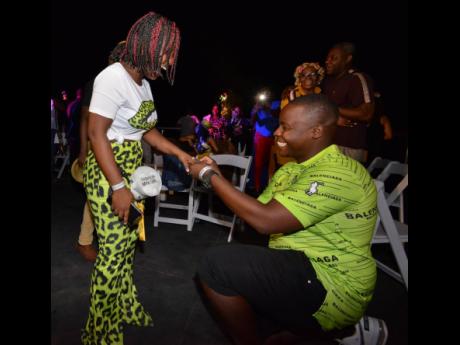 Narmeo sent up to see 150 Whatsapp messages per day as he sought to convince Tashanna to be his girlfriend.
1
2
3

Narmeo Walker and Tashanna McCourty were among potential recruits who turned up at Up Park Camp four years ago, seeking to join the Jamaica Defence Force. The potential soldiers decided to form a Whatsapp group so they could keep in touch with each other.

Walker, 27, recalls in awe that when he saw her display picture, his focus was no longer solely on becoming a soldier but also to make McCourty his better half.

"When I saw her picture, I was like, wow, she is so beautiful," said Walker, who proposed to McCourty at the stroke of midnight at the Kingston Waterfront, where thousands of persons had gathered to welcome the new year.

Walker told THE STAR that winning McCourty's heart took work. He recalled messaging her in the Whatsapp group, telling her how beautiful she was and how he would love to meet her. However, she took days before she responded.

"Mi hold head and seh 'seriously', but we eventually started to talk and message each other," he said.

That was February 2016, but it was not until April 2017 that he finally got the chance to meet up with McCourty. He had been recruited as a JDF member, but McCourty was not as lucky. But when his training was over, the young soldier had a serious mission to perform. He wanted to make McCourty his forever love.

"I graduated on April 8 and I met her a few days after. She was going to work and I decided to follow her. While I was in Spanish Town waiting, I saw a bright smile coming towards me and I knew it was her. When we were in the bus she was not paying much attention to me, but it was fun actually meeting her for the first time.

"When she got to work, I hugged her and said I will not let you go unless you kiss me, but she did not," he laughed.

Meanwhile, McCourty said that she was not interested in any relationship when Walker first reached out to her. However, while they were texting, she developed feelings for him.

"I felt the love couple of days after he told me that he was interested in me, but I did not want to show him as yet. I wanted to play hard to get.

"He was so persisted at the moment," the 22-year-old said. "He would send multiple messages back-to-back, so when I would leave work I would see like 150 messages or so, of him telling me how much he loves me."

Walker has been planning his move for some time, and even sought help in getting on stage to propose to McCourty, who has made it a habit of heading to the waterfront to welcome each new year. While there on Tuesday night, McCourty saw Walker making moves, but she had no idea what was in store.

"At first, he told me that he was going to meet someone for backstage pass because this year he wanted me to enjoy it fully. I saw him talking back and forth with a strange guy, but I thought they were discussing price for the back stage VIP section," she said of the moment.

When the proposal came, McCourty was shocked.

"I could not believe my eyes ... I was stoned. ... It brought tears to eyes. I did not know that he would express himself like that. It was awesome though, it was a night to remember," she said, joking that she is going to cry again.

Walker said that proposing to his girlfriend in front of thousands of people, knowing it would be broadcasted live on television, was no easy feat.

"When I planned it, I wrote a speech and it just stuck in my head. I am not a shy person, but I was a bit nervous when I was doing it. When I was telling her how I felt, she was just crying," he said.

The 27-year-old soldier said that he wants to make her the happiest woman on earth because she is everything that he needs.

"She motivates me, because I was a party person and she made me see that there is more in life than just partying and drinking. I realised that I needed to hold on to her because I need her," he said.