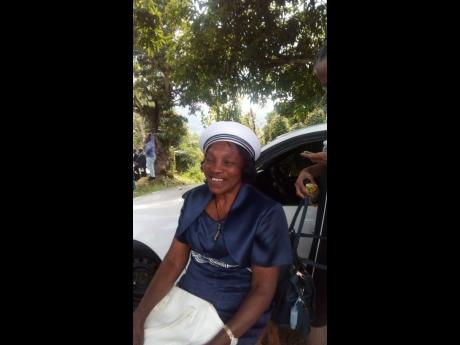 Jennifer Woodfine died at the funeral of her cousins on Sunday.

In a tragic twist of events, John Woodfine, who was on his way home from a funeral in Hanover on Sunday, got a call that his mother, who was attending another funeral, fainted and died.

Eighty-year-old Jennifer Woodfine was attending the funeral for her cousins Martina Wellington and Aubrey Tomlinson in Knockpatrick, Manchester, when tragedy struck.

John, who is one of Jennifer's two sons, said the family is shaken by what happened, and they are yet to tell their father in fear that he, too, take the incident to heart and die.

"He is 86 and she is the one who bathe him and do everything. You know when you get used to someone around you, it is hard to get used to anyone else. He (the pastor) didn't have to do that. No matter how wicked a person is, God is the one to judge. We can't judge anyone. And in a mourning state with a family, you can't be saying that. It look like she tek it to heart because from what I was told, she just come back in the van and sit down and she start gasp and in a second she died," he said.

John described his mother as a loving woman, who is known by all in Berry Hill, where she resided. Her husband is deaf and is troubled with high blood pressure.

He believes that his mother's sudden death was caused by the pastor of the Deliverance Temple Apostolic Church in Knockpatrick, where the funeral for his other relatives was being held.

At the funeral, the pastor said that one of the two persons being buried was destined for hell. "You have two examples in the family, which one will you take?" the pastor asked.

Jennifer, an elderly shopkeeper, who had earlier heard the pastor pronounce hell for her 79-year-old deceased relative but heaven for his 100-year-old mother, collapsed and died as she was being taken from the Oaklawn Memorial Gardens, where the mother and son had just been interred.

She was pronounced dead on arrival at the Mandeville Regional Hospital.

Yesterday, John, Jeniffer's son, said he believes her demise was linked to "what happen at the church".

"I don't normally let her go out on her own enuh, but because is her family, she said she going. That lady is her cousin and that lady grow her. It serious, she is my father's hand and foot. Mi did affi tell him seh she inna the hospital sick so him no even get fi see her. I don't know how I am going to tell him because even now that I am going to go for her body, I am shaking and nervous because I don't know how he is going to take it," John told CENTRAL STAR yesterday.

He condemned the pastor for his actions, indicating that God should be the only judge and juror in this life.

"For you to condemn someone like that, you upset people, and for her condition, it look like she take it hard," John said.