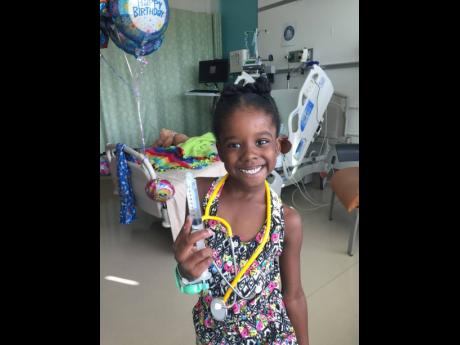 Kayandreth is happy and cheerful again. 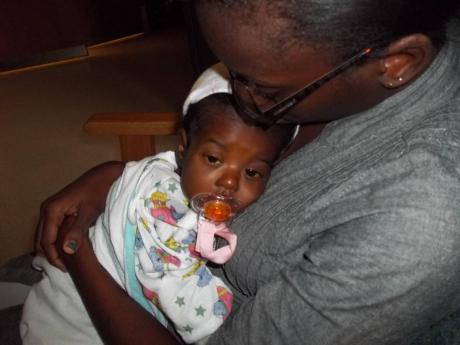 Baby Kayandreth as her health was still in jeopardy. 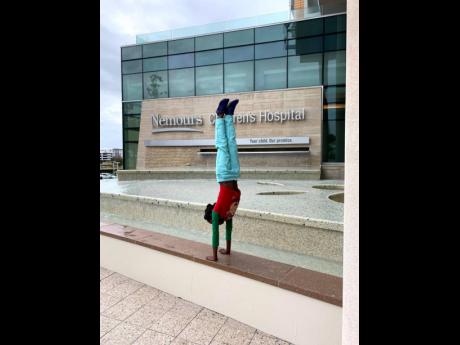 Showing how far she’s come, Kayandreth is even performing handstands.
1
2
3

De-Andreth Hanson was only 21 when she welcomed her daughter Kayandreth into the world in 2012.

She thought that everything would be OK, even though the child was born with jaundice. According to her paediatrician, all the baby needed was a little sun.

For four months, Hanson would place her baby in a cushioned bathtub and put her in the morning sun for 30 minutes.

But her baby girl was not getting better. It was not until she was referred to The University Hospital of the West Indies (UHWI) that Hanson found out her baby had a rare liver condition known as biliary atresia.

With the childhood disease, the bile ducts outside and inside the liver are scarred and blocked.

Bile can't flow into the intestine, so bile builds up in the liver and damages it. The damage leads to scarring, loss of liver tissue and function, and cirrhosis.

"I was distraught because there was nothing I could do at that time. I was in Jamaica and they said she needed a liver transplant and they don't do that here. I knew I couldn't give up. I had to try every avenue that I could think of. I emailed 152 hospitals. Every hospital I could find that did the transplant, I did it (emailed). I emailed hospitals in the US, UK, and the Caribbean. I even went as far as emailing hospitals in India," she said.

Hanson, who was doing her undergrad studies in the US, had to leave them behind to attend to her child.

The Waltham, Manchester resident said she started to feel as if all hope was lost until she got an email from the Nemours Hospital for Children in Delaware, saying it would do Kayandreth's procedure for free.

"I was in disbelief. I kept reading the email. I looked up the hospital again and googled the person who signed the letter just to make sure that it was real. By some miracle by the Lord it was real. Other hospitals had responded to us but I did not have the money to pay for the surgery," she said. Kayandreth got her new liver before she turned one. Doctors transplanted 30 per cent of her mother's liver to her.

Today, Hanson is thanking God as her daughter celebrated her eighth birthday last September, and is doing well in second grade. She said that she did not think Kayandreth would have made it this far.

"I probably have one picture from the time she was at UHWI because we were so sure she was going to die. Nobody was thinking about taking pictures. Her stomach kept growing and she was moaning in so much pain. I was so sure that I was going to lose her. I remember one of the doctors told me that I was young and I could have another baby. But this is really a miracle," she said. But Hanson told CENTRAL STAR that the road ahead is not without obstacles.

"She is doing well. She has had some rejections over the years. The last rejection was last year. They say her body will not fully accept it because it doesn't recognise all the DNA. She goes to the doctor every three weeks. She takes her meds and she will be on medication for the rest of her life. I know she is not the only one going through this, I just want them to know there is hope," she said.