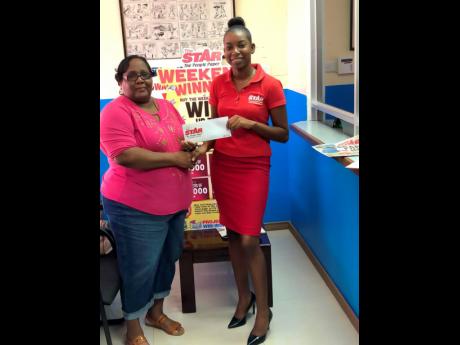 Maxine Smith, a winner in THE STAR’s Weekend Winninz competition, collects her is $10,000 prize money from Jodian Anderson, a clerical assistant at the Gleaner Company (Media) Limited’s Montego Bay office.

Maxine Smith of Wharf Road, Orange Bay, Hanover, was equally elated and proud when she was declared a winner in THE STAR's Weekend Winninz promotion.

Smith, 62, a former grocery shop operator, has been an ardent reader of this newspaper, so much so that she religiously purchased a copy on a daily basis over the past 10 years.

"I depend on THE STAR, especially the weekend one for information, so I can know what is happening in the country. This paper is my source of news," Smith said, after collecting her $10,000 prize money at the RJRGLEANER offices in Montego Bay, St James, last week.

"When I start watching the television, I am falling asleep, so I have to depend on THE STAR newspaper for the news," Smith said to much laughter.

"I don't watch the TV much. I tried to read the papers, so I make sure to get The STAR mainly for the Tell Me Pastor column with pastor Aron Dumas. Some of the people write about some rubbish, but when pastor answer them he sets them straight."

"When THE STAR newspaper is sold out, I have to leave home and go get it wherever I can, just to satisfy her needs and keep her quiet," Natalie said.

The Weekend Winninz competition requires readers to purchase a copy of the WEEKEND STAR which has a serial number located above the masthead at the right-hand corner. Readers can win up to $100, 000 each week if the number is selected in the weekly draw.