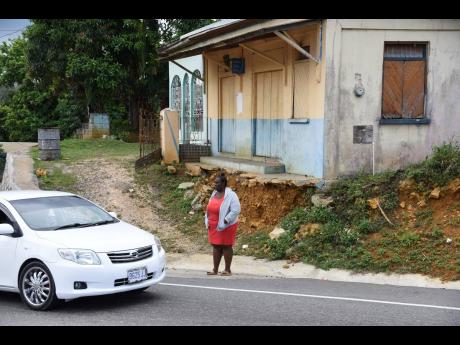 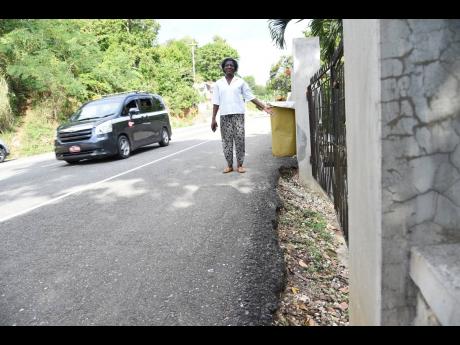 Some residents have difficulty accessing their homes following the acquisition of their lands to accommodate the road expansion. Buelah Morgan, for example, steps out of her yard and on to the roadway. 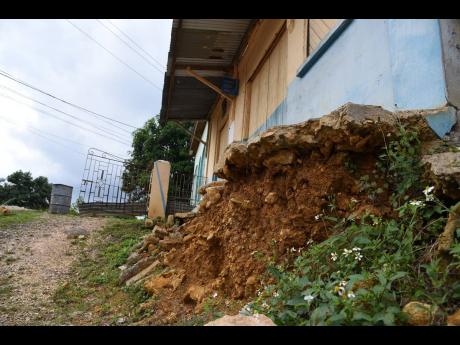 This shop in Turners, near Chapleton, has been closed since the upgrading of the Chapleton to Soursop Turn road in Clarendon.
1
2
3

Yvonne Lewin is blaming the National Work Agency (NWA) for destruction to her property. The Turners, New Roads, Clarendon woman said she has been forced to live a mediocre life as a result of the work carried out to upgrade the Soursop Turn to Chapleton road in the parish a few years ago.

Several landowners had to give up pieces of their property to facilitate the road construction, and many said they are yet to be compensated for their properties. In addition, some residents said that their livelihood have been affected because their properties were acquired to accommodate the major road project. One of those persons is Lewin, whose shop can no longer be accessed from the roadway.

"My shop was rented as a second source of income (but) because of the excavation, it cannot be rented because there are no steps there to enter the business," she told the CENTRAL STAR.

The single mother of four said she loses an annual income totalling $96,000 as a result of being unable to rent her shop. She claimed, too, that her house has been damaged because of the road construction.

"My house cracked straight through, from front to back, because of the digging. My yard was fenced and gated at the front, and they dug away my gatepost. I have no privacy," she bemoaned.

"I am without water; goats and people use my yard as the main thoroughfare to and from," she added.

An early-childhood teacher, Lewin said she was given documents in March 2017 to sign for land compensation two months after the roadwork was completed. However, since then, nothing has happened.

"No one has been compensated, not a single soul," she said.

The project, which was started in September 2014, is aimed at improving one section of the access road linking the central areas of the island to the north coast via May Pen to Trout Hall, through Cave Valley to Discovery Bay.

While noting that the road repairs has improved the flow of vehicular traffic, Lewin said her personal life has been greatly inconvenienced.

"It enables a smoother flow of traffic during the peak hours of the day, but before, I could earn a second income and better finance my personal needs. It has impacted me negatively and I am greatly inconvenienced," she said.