One minute reads around the Caribbean 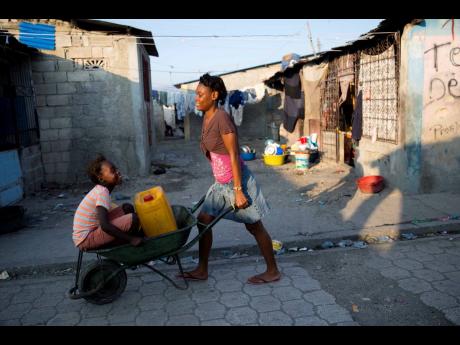 A girl carries her sister and and a jerry can of water in a wheelbarrow in Cite Soleil, a slum of Port-au-Prince, Haiti.

PORT AU PRINCE, Haiti, CMC – An earthquake with a magnitude of 3.4 on the Richter scale was recorded to the west of Haiti last Saturday.

The Bureau of Mines and Energy says the epicentre was located 20 kilometres west of Port-au-Prince, between the commune of Léogâne and Carrefour and 5.6 kilometres northwest of La Salle.

The earthquake was noticeable in the metropolitan areas of Port-au-Prince, Kenscoff and Pétion-ville. The regional office of the Directorate of Civil Protection did not report any damage or loss of life.

HAMILTON, Bermuda, CMC – A ship at the centre of a scare over a killer strain of coronavirus is due to arrive in Bermuda on Monday as health officials announced that 14 people on the island are being monitored as a precaution.

Royal Caribbean’s Anthem of the Seas had four passengers taken to hospital amid fears they may have the virus after the ship returned to its home port in Bayonne, New Jersey, last Friday.

Tests later showed none had the virus which has killed more than 800 people worldwide, all but two of them in China.

Bermuda’s Ministry of Health and port authorities said on Sunday they were prepared for the ship’s visit to Dockyard at the island’s west end.

SANTO DOMINGO, CMC – The Organization of American States (OAS) says officials for penitentiary policies in the Americas, including the Caribbean, have called for the adoption of measures to promote initiatives for the “humanisation” of prison systems.

The officials say that they recognise that one of the main objectives of deprivation of liberty is the rehabilitation and social reintegration of the individual.

The OAS said the fourth meeting of Officials Responsible for the Penitentiary and Prison Policies of the Americas, held in Santo Domingo, Dominican Republic, concluded with the adoption of 12 recommendations.

The OAS said officials recommended, among other things, the promotion of initiatives to humanise prison systems, and the making of every necessary effort to eliminate overcrowding in prisons.

BRIDGETOWN, Barbados, CMC – The Government of Barbados has denied entry to the cruise ship MV Caribbean Princess due to an outbreak of gastro-enteritis on board.

The ship, carrying in excess of 3,000 passengers and 1,000 crew, was scheduled to berth at the Bridgetown Port yesterday morning.

According to Acting Chief Medical Officer, Dr Kenneth George, the Ministry of Health received several reports, including from the Caribbean Public Health Agency (CARPHA) of “a significant outbreak” of gastro-enteritis on the ship.

George said that in keeping with the guidelines of the Centers for Disease Control and Prevention (CDC) and “as a matter of caution” aimed at protecting both the passengers and the people of Barbados, the Ministry of Health decided that the cruise liner will not be allowed to berth at this time.

ST GEORGE’S, Grenada, CMC – Health officials have placed another Grenadian in quarantine, bringing to four, the total number of Grenadians quarantined in the past week.

The latest traveller, identified as a student, left mainland China and landed at the Maurice Bishop International Airport late Saturday.

On arrival, Ministry of Health personnel, port-health, immigration and airport officials acted swiftly to isolate the individual from the general population at the arrival area.

In a release, the Health Minister said that in keeping with established protocols – as soon as the aircraft landed, it was boarded by a port-health officer, who informed the flight’s captain of the concern.

The student was screened and interviewed by medical personnel.