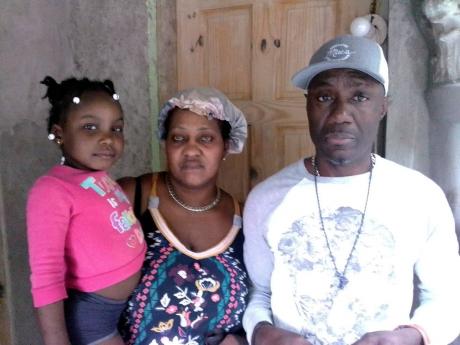 Distraught parents Shereen and Clarence Johnson stand with their four-year-old granddaugter D-Lania Arnold, whose mother, Donnia Johnson, was found dead in a male bathroom at her workplace.

The mother of Donnia Johnson, who was found dead in a male bathroom at her workplace in St James in January, said she will not rest until she finds out how her daughter died. An autopsy, which was done last Wednesday, did not ascertain the cause of death. It did, however, confirm that the 22-year-old stock clerk was pregnant.

"My husband and I will be seeking legal advice as how best to approach this matter, because we do not intend on letting our daughter death just slide like this," Shereen Johnson told THE STAR.

"We are still amazed at the results from the autopsy," Shereen Johnson said, adding that "come next week, we will be going the extra mile to find out how our daughter really died."

Donnia's body was discovered in a male bathroom at Vikings Production in the Montego Bay Freezone. She failed to return home from work on the Monday and her body was found the next morning.

The mother of a four-year-old girl, Donnia was about three months pregnant but she did not tell her mother that she was expecting.

"She was giving me a few hints here and there, so am not going to say I knew, but I was suspecting something based on her reactions," Shereen Johnson said.