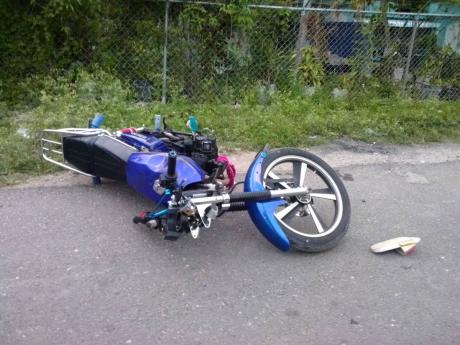 Two alleged gunmen were shot in Mud Valley, Retirement in St James, after they reportedly attempted to escape on this motorcycle.

A heated gun battle between members of the security forces and gunmen resulted in the death of two wanted men in St James yesterday.

Police said that Kemo Kerr, otherwise called Ziggy, and Temoy Smart, otherwise called Beenieman, both of Mud Valley in Retirement, were killed during a shoot-out. A third man was shot and injured by the lawmen. He was under police guard at hospital at press time yesterday.

Kerr reportedly shot at a team of police personnel while they were on patrol in Granville on Monday. It is also alleged that he shot and injured a man along Gordon Crescent Tuesday morning.

Yesterday's gun battle lasted some two hours. Reports by the Granville police are that shortly after 10 a.m., a joint police/military team was on patrol in the Mud Valley area when they saw a group of armed men in a lane. The police said they called out to the men, who immediately opened fire at them.

The lawmen said they took evasive action and returned the fire. During the exchange of gunfire, one man was shot in a yard while two others, who allegedly attempted to escape from the scene on a motorcycle, were also shot. Two illegal firearms and several rounds of ammunition were reportedly taken from the dead men.

The police said that three other men escaped.