‘Mr Brutal why did you do it? - Father of woman killed on New Year’s Eve asks 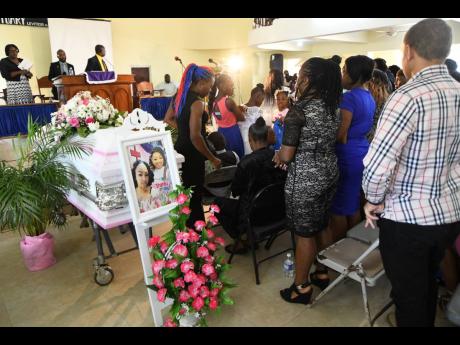 Mourners inside the church. 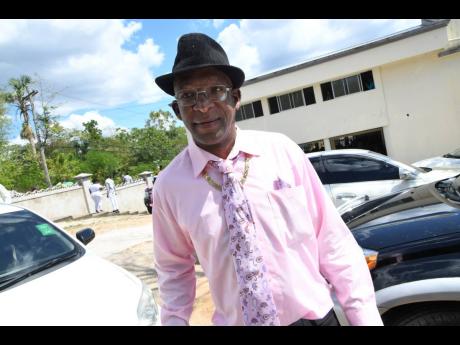 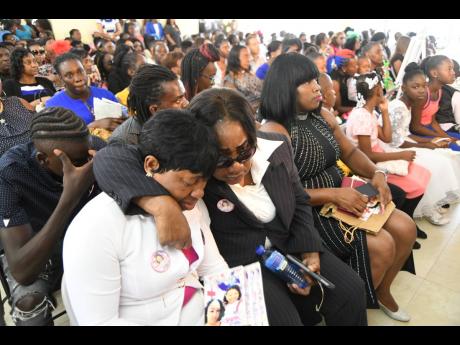 Cyrena Russell (left), mother of Shantell Whyte, is being comforted by a family member at the Thanksgiving service.
1
2
3

His stares were blank, but the evidence of the pain one feels after losing a child became noticeable when he opened his mouth to speak.

Alton Whyte was among the hundreds of persons, stricken with grief, who turned up to pay their last respect to his daughter, 24-year-old Shantell Whyte, at the Royal Flat Seventh-day Adventist Church yesterday.

Shantell was shot and killed on New Year's Eve, while at work, allegedly by a supervisor who is said to have been in a relationship with her.

"We had a good relationship and we have real love for each other. When I heard what happened I wondered if I was sleeping. She is the reason why I came back to Jamaica. I was living away and I fell ill and she said: 'Daddy, come home, me will take care of you'" Whyte told THE STAR.

He said the call that he got informing him of his daughter's death replays in his mind constantly and the surveillance footage of the killing he saw has never left him.

No matter the differences

"I would want to ask him (the killer) why him do that. No matter the differences, no matter the circumstances, it never give you no right to do what you do. When I see that video, the way how 'Mr Brutal' kill my daughter. 'Mr Brutal' why did you do it?..." Whyte questioned, as anguish coloured his tone

He added, "I just want the case the be over. So far the matter has been called up twice in court. I just want justice to be served properly. People are saying a lot of things, but my daughter was very ambitious and driven"

He said Shantell was pursuing short courses in business and had aspirations to continue making her family proud.

"Just a few days before her death, I called her but I didn't get her and I called her mother to tell her that I'm working on a shop while I live and if she wants it she can have it to do any little business she wants to, but she didn't even live to take up the offer," he said.

Whyte had his stepdaughter do the tribute on his behalf.

"She was always there to pick me up whenever I fell down. She was special... There was so much more that she had left to accomplish , a thousand more memories to make and so many more lives to touch...I consider it a privilege to have been her father," the tribute read.