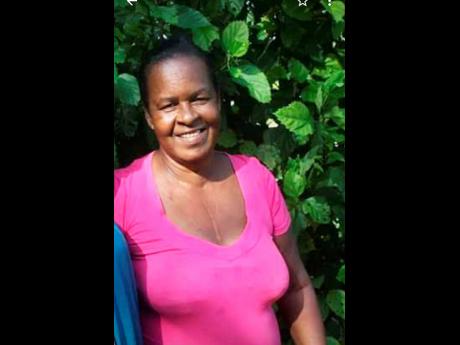 Hours before Patsy Donaldson-Powell's body was discovered in her house with the throat slit on Saturday, a neighbour said he was forced to pull her from the grips of her male companion, who was allegedly beating her mercilessly.

Dennis Smith, a trucker and mechanic, said he "saw the devil" in the eyes of the man, who he alleged was beating up Donaldson-Powell. He told THE STAR that he rushed to the woman's assistance after she was heard crying for help on Saturday afternoon.

" Mi affi jump pon the man and pull him offa the woman, and him jump round pon mi and look inna mi face like a the devil from hell and seh 'a fi mi woman, so none a unnu caah do mi nutten'," Smith said.

Donaldson-Powell, 55, was discovered dead in the house in Ridge Exton, Junction, St Elizabeth, on Saturday night.

When THE STAR visited Donaldson-Powell's home on Sunday morning, a large crowd had gathered in the yard. Karen Brooks, the deceased daughter, said that the suspect, despite being married, was in a relationship with her mother. She claimed that her mother was a victim of physical abuse.

"Several times we have had to call in the police ... but as soon as the police warn him, he would go home and sober up, and the next day him come back and beg my mother to take him back," Brooks said.

Superintendent Samuel Morgan, head of the St Elizabeth police, said that "Somebody has been taken into custody, pursuant to our investigations". He, however, declined to name the person or say whether he is the same man who was allegedly beating Donaldson-Powell, hours before her body was discovered.