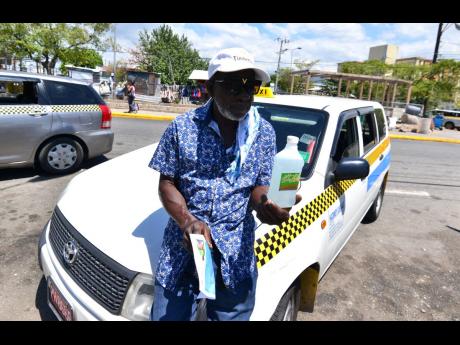 Rupert Brown shows his hand sanitiser, part of his protective measure against COVID-19. 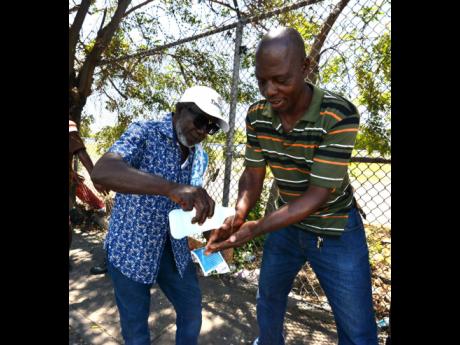 Some taxi operators are imploring their colleagues not to hike their fares although they have been instructed by Government to carry one less passenger in wake of the COVID-19 spread.

Richard Daley and Rupert Brown, who operate between Cross Roads and South Camp Road, said that although they will be making less money per trip, their conscience would not allow them to overcharge a passenger.

The duo were among a group of taxi men who had parked their vehicles in Cross Roads and were enjoying a game of dominoes while they waited patiently for passengers.

"We can't charge dem more because dem a poor people like we self. Of course we gonna lose because is just three passengers we a collect from and gas price nuh decrease but the people dem can't afford it because a whole heap a dem no have no work now," Brown said.

In a press conference Monday afternoon, Prime Minister Andrew Holness announced that there would be restrictions placed on public transportation.

Under this order, the Jamaica Urban Transit Company and Montego Bay Metro would be required to only carry passengers seated.

Taxis would be required to carry one less passenger than they are licensed to do.

"The place is at a standstill because normally dem time here we would be carrying people back and forth, but seet deh now all the taxi stand full. People still a Children's (Bustamante Hospital for Children) same way and we know a poor people place so we can't raise the fare. Right now after we done play dominoes, mi just a go take a trip to the beach," Daley said.

As they enjoyed their domino game, it was obvious that the taxi men were all about safety as they stopped at regular intervals to sanitise the board and their hands.

Looking over at the Caledonia Transport Centre, which was filled with empty vehicles, Brown admitted that they may "put on a little ting on it (the fare) like when it go after 10 o'clock".

"But that is something whe usually happen. Right now we just have to protect the passengers and ourselves. Mi nah scorn no one but mi just make sure say mi spray out di car and spray up mi clothes after each trip. Mi really just a look forward to when the place get back normal," said Brown.