Vybz Kartel lawyer 'expected' appeal would have been denied 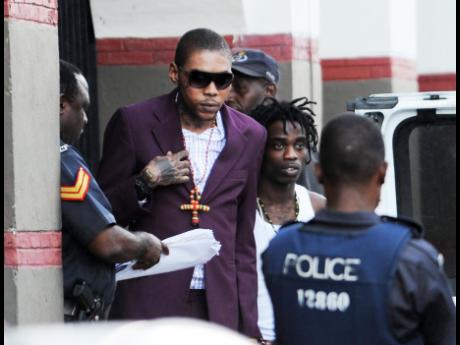 In this 2014 photo, Vybz Kartel (centre) leaves the Home Circuit Court in Kingston.

A lawyer for dancehall artiste Vybz Kartel said she is not surprised by the decision of the Court of Appeal to dismiss the appeal to have his murder conviction overturned.

"The public pressure is such that there is a lot of negatives for Vybz Kartel from certain persons and areas of the society, so I expected it," Valerie Neita Robertson, a senior counsel in the matter, said after the verdict this morning.

Neita Robertson, who came into the matter at the appeal stage, is convinced "He did not get a fair trial".

Earlier this week, THE STAR reported that Kartel, in comments sent via Gaza's vice-president, Sikka Rhymes, felt that he should not be in prison.

"I'm 100 per cent sure I should be set free. Legally, there is very little to be concerned about. But put the 'Kartel factor' in the mix and everything gets complicated," Kartel said.

Meanwhile, the court has given the  lawyers seven days to submit information to support their claim that the sentences were excessive. Kartel  has been sentenced to 35 years, while his co-convicts Shawn Storm’ Campbell, Kahira Jones, and Andre St John were sentenced to 25 years' imprisonment.

"I would say that they have already agreed it should be reduced," Neita Robertson said. She said that the fact that the court is considering a sentence reduction is a big deal.

The dancehall deejay, who has been a dominating figure before and during his incarceration, has had his legions of fans around the world calling for freedom for the “Worl’ Boss’, as he refers to himself.

Neita Robertson said that Kartel's defence team has been preparing for all eventualities and had already placed a lawyer on standby to argue the case before the Privy Council in England.  The lawyers will now have to seek leave from the Court of Appeal to go to the Privy Council to appeal the case and Neita Robertson said that it could take at least a year for this to take place.