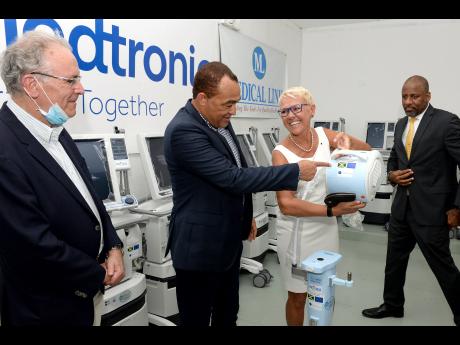 Minister of Health and Wellness, Dr. Christopher Tufton (second left) and European Union (EU) Ambassador to Jamaica, Her Excellency Malgorzata Wasilewska, examine a mobile ventilator during a handover ceremony for 29 ventilators. The ventilators, valued at approximately €1 million, were handed over to the Government by the European Union. Observing (from left) are Ambassador of Spain to Jamaica, His Excellency Josep Maria Bosch, and Director General, Planning Institute of Jamaica, Dr. Wayne Henry.

The Government has received 29 ventilators valued at approximately €1 million from the European Union (EU), to support patients who need intensive care in hospitals and to treat patients infected with the coronavirus (COVID-19).

They will be distributed to hospitals across the island. Of the total, six are small mobile ventilators.

The units were handed over to Minister of Health and Wellness, Dr. Christopher Tufton by EU Ambassador to Jamaica, Her Excellency Malgorzata Wasilewska, during a ceremony on the grounds of Medical Link Limited.

Expressing thanks for the life-saving machines on behalf of the Government and people of Jamaica, Tufton said they will add to the 25 already in use in the public health system.

“This has effectively doubled the capacity of what we had originally, as we did bring in another eight or 10 over the last number of weeks and there are more to come,” the Minister said.

“The ultimate goal is to have between 90 and 100 to support persons who may become sufficiently ill to require that high level of support. It would put us right in the zone where we would be comfortable and able to give that option to patients who need it; so we are on track,” he added.

He noted that the addition of the machines represents a major advancement in the implementation of the COVID-19 response plans that the Government has put in place to stem the spread of the virus.

For her part, Ambassador Wasilewska said she was honoured to assist in bringing the ventilators to the people of Jamaica in the time of such need.

“The ventilators arrived this week and I was extremely impressed at how quickly they were cleared by Customs. There is an enormous demand for these machines worldwide, and so we are very lucky to be able to get so many of them and bring them back to Jamaica,” she said.

She added too that the EU is providing other medical supplies and equipment that are expected to arrive in the country at a later date.

The units were purchased under the EU-funded Programme for the Reduction of Maternal and Child Mortality(PROMAC).