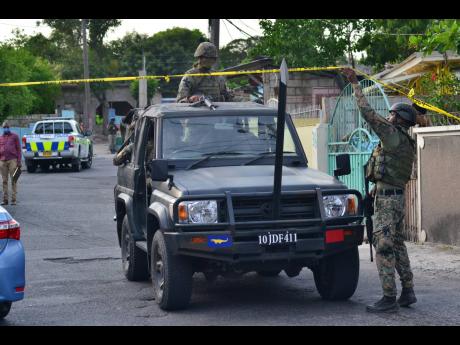 Soldiers patrol a section of August Town, St Andrew, where a disabled woman died, allegedly at the hands of the security forces yesterday.

When Grace Freckleton heard that someone in her August Town, St Andrew, community was shot, allegedly by members of the security forces yesterday afternoon, the thought that it may be one of her family members never crossed her mind. However, little did she know that the victim was her disabled daughter, Susan Boyle. The 44-year-old was shot dead as she laid in her room.

"Mi see two solider man a bawl and a walk go dung the road and a say a the wrong person dem shot," Freckleton said. "Mi daughter never deserve this," she said as the tears welled up in her eyes.

Bogle lived in a yard on Bryce Hill Road with three other disabled persons.

"All four of dem in the yard disabled and the police and solider dem know say a bare handicap people live in the yard too, because dem go in deh all the while so dem know. Susan was a loving woman and she loved her kids dem. Her big son have a house down the road and tell her to come live with him and she say she naah go and leave her other son up here," she said.

THE STAR understands that Bogle was shot as police and soliders chased wanted men through the yard where she lived.

"Dem say a three shots she get, but even if dem see man a run, as dem claim, when dem buss her door and dem fire one time and dem realise say a di wrong person why fire two more shots. She alone was in her room, enuh," Freckelton said.

When our news team contacted the Constabulary Communications Unit for a comment last night, THE STAR was told that investigators were still at the scene and the information would be made available soon. None was provided at press time.

The Independent Commission of Investigations has launched an investigation into the incident.