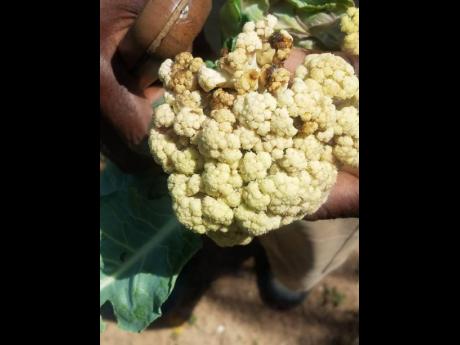 Leroy Morrison shows cauliflower that has been scorched by the heat from the sun. 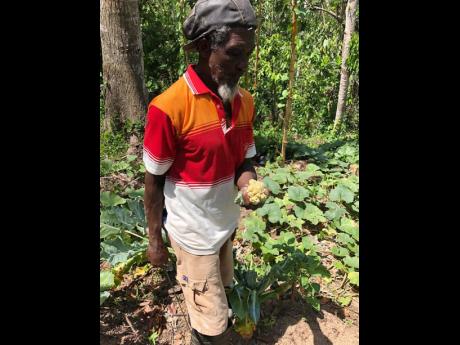 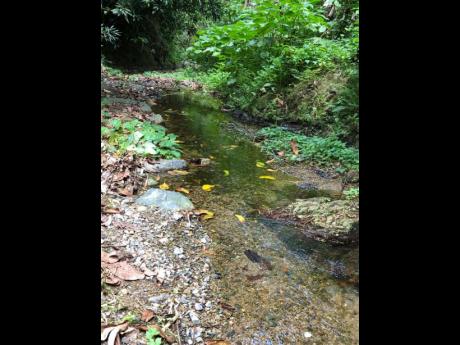 The stream that Leroy Morrison depends on for water for his farm.
1
2
3

A number of small farmers in Glengoffe, St Catherine, who have experienced losses amounting to hundreds of thousands of dollars due to the effects of the prevailing drought conditions, are now faced with the possibility of other natural disasters that could further impact their livelihoods.

Forecasters are predicting an active hurricane season this year, and some farmers in this rural St Catherine farming community are fearful that their farms could be further wiped out if impacted by heavy and continuous rainfall, associated with any emerging weather systems or hurricanes.

Leroy Morrison, a small farmer, said he has reasons to be concerned about the predictions for an above-average hurricane season.

"I have other crops like coconuts and cane and I will lose them if the breeze come. I am not too worried about the landslide that could destroy the rest of the vegetables, because I am planting pineapple and straw to stop the soil from moving, but even with this I know I will lose some of the vegetable crops if we get heavy rains," Morrison said.

The farmer said that he has hardly rebounded from the drought that caused him some losses.

"I was not doing too badly, because I was getting water from the pipe to water the plants, but we start to face water crisis and I had to transfer some of the plants further down the hill, near a little stream where I could get some water," Morrison said.

"Before this happen, I lost more than 50lbs of cauliflower and about the same amount of broccoli."

Morrison said the area experienced a little rainfall a couple weeks ago, after which the sun came out in all its glory and scorched a patch of the cauliflower and broccoli before he could reap them.

"I am registered with RADA (Rural Agricultural Development Authority), but I can hardly get any help from them. About six weeks ago I got half a bag of fertiliser, and that's all. I asked them for some orange suckers so that I can go into orange farming, and until now I don't hear a word from them," he disclosed.

Bertham Reid, another farmer, estimated his losses to be in the region of $150,000 as a result of drought. "It has burned down most of my vegetables, mainly the sweet peppers and tomatoes, there is no way I can make up for this loss."

Reid, who is also a member of RADA, said the organisation gave him a half a bag of fertiliser some weeks ago to help with his farm. He said he has concerns about the hurricane season because it is difficult to determine how active it will be because of climate change.

Headman Gayle, another small farmer who specialises in the cultivation of ginger, along with yellow yam and sugar cane, said he has lost thousands of dollars worth of produce due to the drought. And like his fellow farmers, he is worried that an active hurricane season could spell disaster for him.