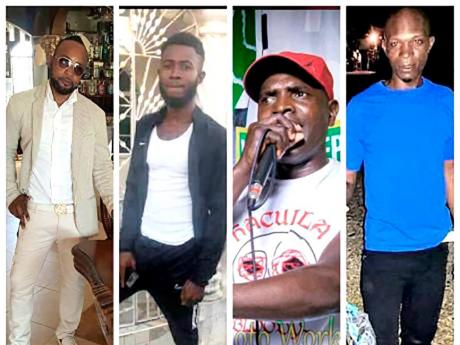 Mel*, spouse of 30-year-old Omar Bennett, whose body was found in a shallow grave in an area known as 'Danger Island' along the Sandy Gully bank in St Andrew, is bemoaning that Bennett will not witness the birth of their first child.

"He was going to be a wonderful father to our child," Mel said.

Bennett, of Rocky Point in Clarendon, was among a quartet of men who went missing on Tuesday, April 7. Their bodies were found in an advanced state of decomposition in shallow graves in Danger Island last month.

Bennett's spouse said that he was a man who worked tirelessly towards his goals. "There's not one thing anyone can say that's bad about Omar. He had a kind spirit and was always willing to help anyone. He was never in any trouble. Omar loved making anyone around him laugh and smile. He was a joker. He was a wonderful spouse, a great brother to his siblings, and he loved his family tremendously. The family misses his enthusiastic spirit and it won't ever be the same without him being here," she said.

Bennett, Kavan Graham, a business operator, also of Rocky Point; 33-year-old Ricardo Mathra, a sound system operator; and 40-year-old Roy Hamilton, both of Longwood in Race Course, were among the group who left the parish to conduct business in the Corporate Area. They never returned home. Their remains were found in the Danger Island shallow graves. The police are yet to identity a fifth body found at the location. Two men and a woman were taken into custody following the discovery of the bodies.

Nicolas Graham, brother of Kavan Graham, said, "A this name loss! No positive words, pure devastation. We are distraught, everything that is bad."

He said Kavan was had an outgoing personality and was the life of the party. "Him jovial, man, fun, love girls, love party and just friendly."