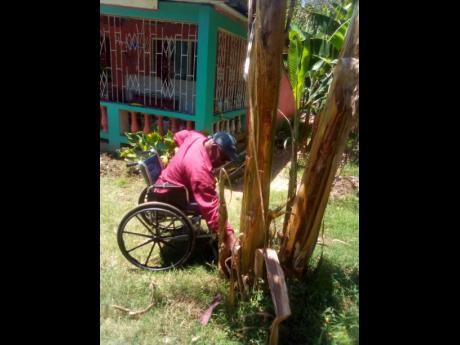 Josiah Shaw tends to a banana tree at his home in Content, St James. 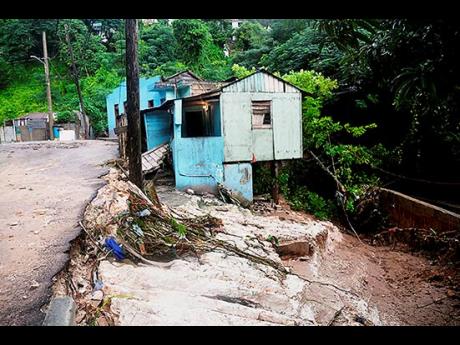 This house, located in Montego Bay, St James, was destroyed by flood waters in 2017.
1
2

Farmers in St James are already keeping a watchful eye for any storms coming to Jamaica during the 2020 Atlantic Hurricane Season, being mindful that their livelihoods and their properties are at risk if a hurricane should have an adverse impact on the island.

In May, the Colorado State University's Tropical Weather Project team in the United States of America predicted that there would be 16 named storms during this hurricane season, which started this month and ends on November 30. Eight hurricanes and four major hurricanes are in that forecast, with gusts of wind of 100 kilometres an hour or more.

For 80-year-old banana and cane farmer Josiah Shaw, a wheelchair user whose farm is located in Content district, his experience with Hurricane Gilbert in 1988 will always be a stark reminder of the danger that each hurricane season could potentially bring. That danger has increased significantly ever since he lost a leg to diabetes more than a year ago.

"The first time my roof blew off was during Hurricane Gilbert, and it was a good distance I went to pick up the zinc that blew off my house," Shaw recalled. "So anytime breeze blows, I have to consider it because I live on the wind coast, and if you look in a particular direction, you're looking to the sea coast, where the rain comes."

The elderly Shaw, who resides with relatives and hires an assistant to help him around his farm, added that just because he was disabled didn't mean he would back down from tending to his crops or shy away from any imminent danger due to potential storms.

"I have to consider all factors, especially now, since I'm not as mobile as I was before. All I can do is batten up what I can and trust that I'll be able to get through any storm," said Shaw, who has been a farmer since 1992.

"But I'm not stopping as long as life is spared. I can't do it myself, so I have to get someone to help me with the work, but I don't have any reason to stop."

Ewen Yapp, who farms calalloo, plantains, and corn at his two-acre property in Dumfries, said that he was more concerned about farmers getting assistance from the Rural Agricultural Development Authority (RADA) after the passage of a hurricane. He said that he did not rely wholly on the farming agency, instead taking precautions to safeguard any mature crops ahead of a storm's anticipated arrival.

"I want to see more activity from RADA after a storm. Sometimes you only hear that they're going around, but I have never personally experienced any of them coming here. It's just because I try to help myself rather than depend on them because that is part of your preparation for the hurricane," said Yapp.

"Some of my crops are low crops, and they would not be affected as much by a storm, but it's just that we have to prepare for the eventuality of it. Most times what I do once I hear that a storm is coming, I try to get rid of the mature fruits as much as possible."

When contacted, Recorgo Holt, the RADA parish manager for St James, said that his office has been proactive in teaching farmers how to protect themselves and their crops and livestock in the event of a major disaster.

"We are out there training the farmers as to ways to safeguard themselves against any form of emergency, such as hurricane or drought and even fire, so we're out there trying to impart the knowledge as best as possible. We also partner with other agencies such as the Social Development Commission, the fire department, and the St James Municipal Corporation, and there's a broader agricultural disaster risk committee for the parish that meets every third Thursday at the municipal corporation," Holt outlined.