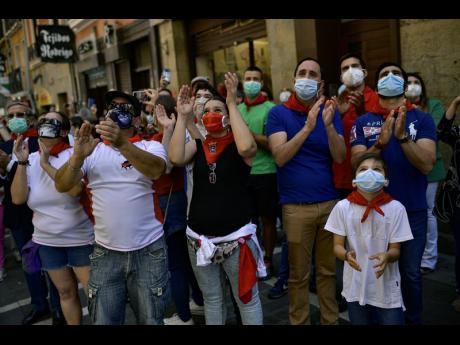 FILE In this Saturday, June 20, 2020 file photo, residents wear faces mask to protect against coronavirus and wear San Fermin's red kerchief as people march the route of the running of the bulls while a singer performs a San Fermin's festival song, in Pamplona, northern Spain. Spain reopened its borders to European tourists Sunday, June 21, 2020 in a bid to kickstart its economy while Brazil and South Africa struggled with rising coronavirus infections. At a campaign rally, President Donald Trump said he told the U.S. government to reduce testing for the virus, apparently to avoid unflattering statistics ahead of the U.S. election in November. (AP Photo/Alvaro Barrientos, File)

BARCELONA, Spain (AP) — Spain reopened its borders to European tourists Sunday in a bid to kickstart its economy, while Brazil and South Africa struggled with rising coronavirus infections. At a campaign rally, President Donald Trump said he told his administration to slow down testing because it was turning up too many cases — though a White House adviser later said Trump was kidding around.

The virus has infected over 8.8 million people worldwide and killed more than 464,000, according to figures compiled by Johns Hopkins University, though the true numbers are thought to be much higher because many cases go unreported or undetected.

Spain ended a national state of emergency after three months of lockdown, allowing its 47 million residents to freely travel around the country for the first time since March 14. The country also dropped a 14-day quarantine for visitors from Britain and the 26 European countries that allow visa-free travel.

But there was only a trickle of travelers at Madrid-Barajas Airport, which on a normal June day would be bustling.

“This freedom that we now have, not having to justify our journey to see our family and friends, this was something that we were really looking forward to,” Pedro Delgado, 23, said after arriving from Spain’s Canary Islands.

Spanish Prime Minister Pedro Sánchez urged people to take maximum precautions: “The virus can return and it can hit us again in a second wave, and we have to do whatever we can to avoid that at all cost.”