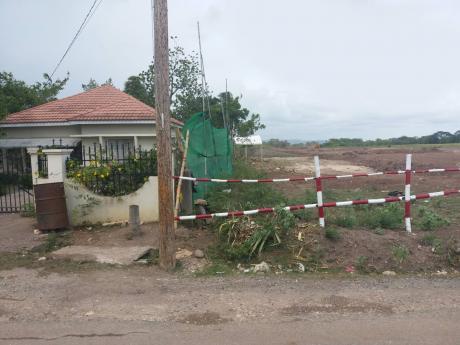 The extension of the East-West highway from May Pen, Clarendon, to Williamsfield, Manchester, runs close to Careem Pinnock’s house in Four Paths, Clarendon.

Careem Pinnock of Four Paths in Clarendon is livid. He said that the extension of the East-West toll road from May Pen, Clarendon, to Williamsfield in Manchester is putting his family in harm's way.

He bemoaned the fact that the road is being cut close to his house, and that a promise by the highway developers to buy his property has been abandoned.

Pinnock told THE STAR that the construction has caused damage to his house, and that his wife and son, who are asthmatics, are being impacted by the dust from the site.

"They've been doing a lot of construction from April 'til now and we getting a lot of dust, and the vibration (from machinery) is causing cracks in the wall. The contractors are telling us that we are going to be affected and we should have sold the land," he said.

The construction of the Manchester leg of the South Coast Highway is already under way, and some persons along the corridor have been notified that they will have to give up their homes and farms, for which they would be compensated.

Pinnock said he was approached by the highway developers to buy the land on which his four-bedroom house sits, but they have seemingly changed their minds.

"They came to me five years ago that they wanted the land. We accepted the offer and they came back last year that they definitely wanted the land. We said okay, and negotiated with them, but they didn't come back to us. They did transactions and everything with the neighbours and when we called, they said they heard that we are not selling the land, but we didn't say anything like that," Pinnock said.

"The road is very close to my house, right at the fence side, so the continuous dust from the trucks and the heavy vibration from the equipment are affecting me."

Richard Sadhi, a justice of the peace and community representative on the worksite, said he is aware of Pinnock's plight.

"I remember that issue was raised at a meeting but they said he is not within the radii of the path of the road, so they only purchased houses that were in the path, but they would be having dialogue with him," he said.

Pinnock, 36, who has called the premises home all his life, said the land, purchased over 40 years ago, was conjoined to one of those lots bought to facilitate the highway development.

He is hoping that the developers of the highway will revisit their decision and buy his land.