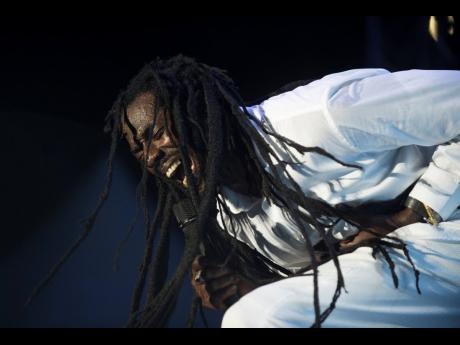 The Grammy-winning reggae artisite won the competition with his entry, I Am A Jamaican. He topped a field that included veteran reggae singers Freddie McGregor, Papa Michigan, Toots and the Maytals, and Nazzleman who have both won the competition several times.

Michigan took second place for his entry, Jamaica Dance, while Sakina finished third with her entry, We Are Jamaica.

"Next year I look forward to see other entertainers donate one song to your country, because we are all Jamaicans," Buju said last night.

Culture Minister Olivia 'Babsy' Grange deliberately wooed the big name artistes and got them to enter the festival as part of a strategy to raise the standard of the competition. The Festival Song Competition began in 1966 and was conceptualised to give Jamaicans a feel-good vibe at Independence time.

The winning song is meant to be the backdrop of the Jamaica Festival Independence celebrations.

"We want you to love Jamaica, be patriotic," the reggae superstar said as he performed I Am A Jamaican, after being declared winner. In addition to the title of Festival Song champion, Buju walked away with a grand prize of $3 million, which is to be shared among the producer, the writers, and the singer. The Grammy-winning reggae artiste, who has a foundation for at-risk youths, hinted that his portion of the money would be going to Sunbeam Boys Home.

"Everyone who participate in this competition, you are all winners. I was happy to share the stage with you all, but, for me, the true winners tonight are the Sunbeam Boys Home," the Gargamel said. "Congratulations to Sunbeam Boys Home, you have done it. Yes!"