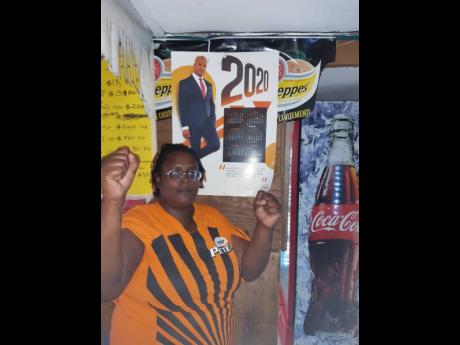 Tamara Bailey Collette Miller says she does not deal with the colour green.

Enter her place of business, her home, and even her closet, and not a green-coloured item you will find in sight. Diehard People's National Party (PNP) supporter, Collette Miller, says the colour is an abomination in her space because it represents the Jamaica Labour Party (JLP), an organisation she will never support. Miller said her dislike of the JLP is not only fuelled by what she deems as the organisation's past and present mishandling of the country, but of an alleged attack on members of her family years ago.

"My father support the PNP right through and through, and during the 1980 elections, he had a hard time. Some Labourite beat him up right there in Waltham, Manchester, and beat up his cousins and put posters on their backs," she said. The 1980 general election is in the history books as the bloodiest in Jamaica's history.

Miller said the unfortunate incident intensified her loyalty to the PNP, predominantly as a militant campaigner.

"I have been supporting the party before I could even vote, and when I turned 20, it got stronger. I used to go with my father on the campaign trail, and that was how I got to meet past prime ministers and party presidents Portia Simpson Miller and Michael Manley," she said. Miller says only one uncle says he's a Labourite.

"But that nuh really bother me. Me nuh waa in a nutten wid green, no green shirt, nutten at all. Me nuh own nutten green. Up to the very bath soap and dishwashing liquid. If I go the supermarket, I will not be buying it. Nutten nuh in a me shop weh green. I will always be a Comrade and me nah change. A me dem call 'Comrade Muma'. Me a di Comrade area leader for Waltham," she laughed.

Miller, who has been a runner for her polling division in the Central Manchester constituency held by Peter Bunting, said that the PNP will win the September 3 election because they are working. "They need to take back this country. When you look at the current government mishandling public funds, corruption, the US dollar is rising, cost of living going up, and dem nah do no work. Most of the projects you see them doing, it was Portia that initiated it and you see dem jump on and take all the credit and all a name road like dem deserve it," she said.

She added, "The JLP councillor for my division not doing anything in the area. Is Peter Bunting I have to call on to get things done. Road repairs, bushing, water distribution, several projects, giving back to the schools, to the farmers, COVID packages, and giving young people better opportunity through education, Bunting do it."

Miller said though COVID has changed the mode of operation for the election period, she will be supporting her party relentlessly.

"I am going on the road without fear. I will be adhering to protocol, wearing my mask and walking with my hand sanitiser, " she said.