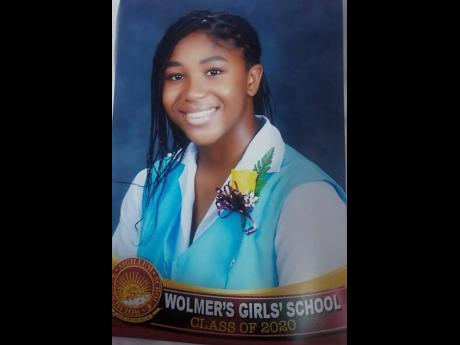 When she lost her father Imran to gun violence in March, 17-year-old Mikaelah Mustafaa's life took a drastic turn. Though she was mentally displaced by his tragic and sudden passing, she did not allow the trauma to cripple her ability to excel in her Caribbean Secondary Education Certificate (CSEC) examinations.

"I had to use what was happening to me as a driving force because I told myself that if my father was here, he would want me to do well on my exams, and he is the one who paid for all my subjects, so I had to make him proud," she told THE STAR. The Wolmerian, who received nine subjects, all grade ones and twos, revealed that it was quite challenging to remain focused in school.

"I was still experiencing depression, so I had to go to school and survive on two hours of sleep, while still trying to focus in class and catch as much as possible," she said. "I knew I just had to deal with it and I had to fix things all by myself because I'm growing up. It forced me to become extremely mature in a short time."

Her aim, she said, was to also make her extended family feel a sense of joy while going through a dark time.

"I also had to do it for my mother and other family members, because I tried my best not to let them see when I was sad. I felt like I had to be strong for them, because then they wouldn't have anything to worry about," she said. Her mother, Daneel Morris, could not be happier ,but said it was rough for Mikaelah.

Not eating or sleeping

"It was very stressful to see my only child weep night on top of night, not eating or sleeping. There were times she came into my room because she had nightmares," she said.

"I had to be there for her, even for the SBAs (school-based assessments); at one point she said she couldn't do them and I had to motivate her and get her to do them. Three in the morning we[are] just going to bed. My work even had to offer me time off because they knew what I was dealing with," she told THE STAR.

"I was worried about her not passing because she missed most of her online classes. But right now, I'm so excited because she used her tears as strength and ultimately got through it. When she saw the grades she said, 'Thank God, this is for daddy, and I'm gonna continue making him proud'." Mikaelah urged persons in grief to accept it and just take time to heal.

"It will be hard, but focus on what is important and tell yourself that there is a bigger picture at the end of the day," she told THE STAR.