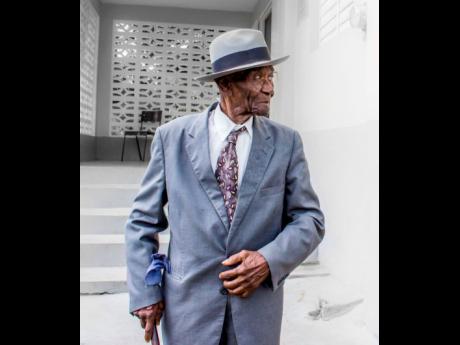 Hundreds of close relatives and friends will be denied the opportinity to bid final farewell to Charles Edward James, Jamaica's oldest person, who died on Sunday.

James, affectionately known as 'Maas Tata', passed away in his Hopewell home near Holly Hill in Darliston, Westmoreland, at 115 years and eight months old. The supercentenarian, who was reportedly born on February 3, 1905, was presumed to be possibly the oldest man in the world.

Up to Thursday afternoon, no date was set for his burial, but Fritz James, Mass Tata's third of 10 children, said the family intends to lay 'Maas Tata' to rest in the family plot at his Holly Hill home.

"We are going to bury him right beside my mother (Louis James) ,'' said the 80-year-old younger James. Maas Tata was married to Louis for 66 years before she died in September, of 2000.

As part of restrictions imposed by the Government to control COVID-19, churches are forbidden from holding funerals. And while burials can take place, no more than 15 persons, inclusive of 10 mourners, are allowed at gravesides.

"It's going to be very difficult to make that decision because every time we consider the size of our family against the protocols for burial, it becomes even more difficult," Fritz said when asked how they intend to determine who will attend.

"It's tuff because while the family plot on which he will be buried is a two-acre property, the protocols allow for 15 people and we have to factor, the pastor and the team from the funeral home, and those who will dress the grave. That will somewhat leave us with about 10 family members."

In addition to family members being forced out of the proceedings, members of the commuiity would also miss out on a chance to sing ' Sleep on beloved, sleep and take your rest' at Maas Tata's graveside.

"I know the wider community members of Hopewell, Holly Hill and Darliston would have loved to celebrate his life with us, but those desires are not possible because of the COVID-19 rules," he said.

Fritz said that given the restrictions, the family is making arrangements to have the burial carried and broadcast live via Internet platforms, so that family members, friends, and the wider Westmoreland community, who won't be attend are able to see his burial and will be able to see the send-off.

Meanwhile, Jerome Baccas, councillor for the Darliston Division, said the people of his division are saddened at the passing of Maas Tata, and are disappointed that they would not be allowed to give him a satisfactory send-off.

"While we understand the need for the restrictions on funerals, we are hoping that at an appropriate time, when normalcy returns to the country, his family will have a proper thanksgiving service, whereby we can celebrate his life together as a community," Baccas said.

"Charles James lived an exemplary life, he was well known and respected. The community is somber and particularly concerned about not being able to give him the farewell in celebration of his life, a bulwark of the hills," the municipal councillor continued.