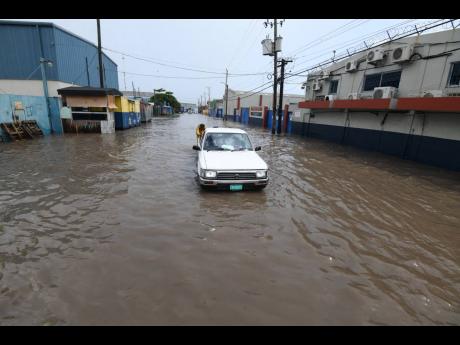 Men try to assist this motorist whose vehicle shut off in high water on First Avenue after rainfall caused flooding in the Corporate Area.

International weather forecasters and computer models are predicting that there is a high chance that a tropical storm could develop in the Caribbean by Wednesday, October 21.

By Thursday, it could grow into a hurricane and may hit Jamaica and other territories, including Cuba and the Cayman Islands.

According to the weather experts, if the models are correct, the tropical storm could flourish into a category four hurricane by the end of next week.

Local forecaster at the Meteorological Service of Jamaica (Met Office) Javed Hudson, says some weather models are projecting "something projecting in the southwest Caribbean for next week".

"However, it is much too early to talk about how intense it will be. We are still not sure exactly where it is going to go, as there is really nothing out there right now," he said.

Hudson said the Met Office is currently watching the southwest Caribbean to see how the weather will progress over the next couple of days.

For the past few weeks, Jamaica has been lashed with heavy rainfall, which has been causing severe flooding and landslides across the island.

As a video of the new projection makes rounds online, Jamaicans are highly concerned, with some persons commenting that they have very little choice except to pray for the best but prepare for the worst.

Dr Barbara Carby, director of the Disaster Risk Reduction Centre at The University of the West Indies, Mona, says, based on a feedback from the Met Office, there is a 20 per cent chance of development.

"Right now, we don't really know. What we will have to do is just keep monitoring it and see if that 20 per cent increases. If it keeps increasing, then the probability will get higher that it could develop into a hurricane, but for now it is just a 20 per cent," she said.