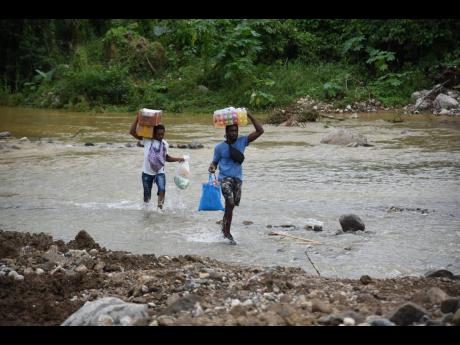 Persons who understand the flow of the water, use this opportunity to run ‘river taxis’ by transporting goods and peope across for a small fee. 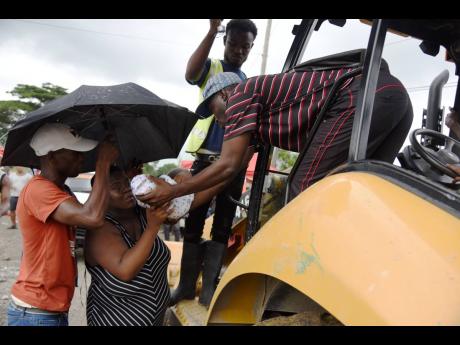 Sheryl Baker gently takes her four-day-old baby boy after piggybacking on this tractor to get across the heavy water passing through Font Hill, St Thomas. 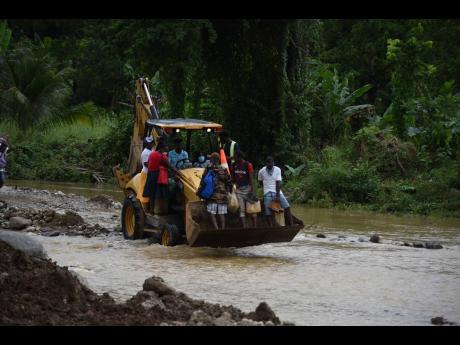 Residents use a tractor to get across the river.
1
2
3

Strong, enterprising men in St Thomas have been earning extra income through a 'river taxi' service they now provide to persons in Font Hill.

Their taxi service, however, does not involve wheels and engine, but rather leg and arm muscles.

The Coley Bridge -- which links communities in west St Thomas such as Trinityville and Cedar Valley, to Seaforth and Morant Bay in the east -- washed away, and a temporary ford that was under construction was rendered impassable due to the Morant River being in spate. So persons have to either cross the gushing, murky water themselves or hire a 'river taxi'.

"Our job is to make sure that people get cross safe and sound, whether baby elder, pickney, sick, goods, anything ... a we bring dem cross because taxis can't do it ... and if yu nuh understand it yuh caah cross it," said Jamaire Osbourne, one of the operators.

Heavy rains associated with Tropical Storm Zeta lashed the island on the weekend, causing flooding, landslides and damage to roads and other infrastructure. Osbourne said the job of a river taxi operator is not easy.

"A from Saturday we out here, and sometimes when mi reach a mi yard mi not even know how fi lie down in a mi bed to how mi tired, but we still have to be out here to help the people dem," he said. "Yuh can give we a $100 or $200, it all depends, because we have even have express rides too where two of us lift dem cross and dem give we a three bills."

Some residents were assisted in crossing the river by tractor operators, who allowed them to board the powerful vehicles at no cost.

Among them was Sheryl Blake and her four-day-old baby. Blake, from Trinityville, was reportedly one of several new and expectant mothers who passed through the river on Monday.

But fellow Trinityville resident Suzanne Laidley, who is some seven months pregnant, had to brave the waters on foot as she travelled home from the Morant Bay Health Centre.

"It nuh nice and mi cyah do this at all. Up to Tuesday gone one of my friends tek in fi have baby and a actually in the water she have her baby. She was in labour and had to be walking through the heavy water because nothing was there to carry her across and the vehicles dem nah risk it," she said. "Mi nuh know what going to happen if mi tek in fi have baby one night."

The Coley Bridge is being replaced by a triple-cell box culvert as a part of preliminary works being done under the Southern Coastal Highway Improvement Project.

A representative of Alcar Construction and Haulage explained that they are working as fast as possible to complete the new structure, however are being badly hampered by the weather conditions.