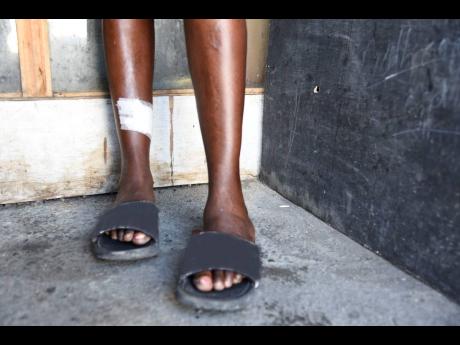 Mary (not her real name) shows where she was hit by a stray bullet in Denham Town on Sunday as gunmen attacked a section of the community.

A bandaged right leg and a bullet hole in her small business place show how close Mary*, a resident of West Kingston, came to death on Sunday night.

The Denham Town resident was hit by a stray bullet as gunmen sprayed a section of the community.

"Every night a shooting happen in Denham Town. Every time mi hear shot me end up have running belly, that's how bad it is. Mi traumatise bad. Is board house we live in and we have nice beds, but a night time a ground me and the children sleep on because mi fraid bad," she said.

Western Kingston has seen a 66 per cent rise in murders when compared with the corresponding period last year. A report from the police's Statistics and Information Management Unit stated that up to November 21 there were 88 murders compared to 53 over the same period last year. There is also a whopping 78.9 per cent hike in shooting incidents while rape declined by 71.4 per cent.

Residents are fed up

Residents of Central Kingston, especially in areas such as Southside, say they are also fed up with the criminal activities that surround their space.

"When yuh live a dem place ya, yuh eyes a di back a yuh head affi a work. On Friday di 13th dem lick dung a man in the morning and before night come a next one dead. Mi nuh know wa really a gwan inna di place. Everytime we see a car a come, more people a take whe demself, sometimes all when dem know di car. That's how bad it is," a male said.

The Kingston Central Police Division has seen an increase in major crimes this year. Up to November 21, there were 45 murders, compared to 35 at the corresponding period in 2019.

There has also been a 45.7 per cent increase in shootings, moving to 51 from 35 last year.

Dennis Brooks, senior communications officer of the Corporate Communications Unit, said he is imploring residents to speak what they know.

"If you see something, say something. The people of every division have a responsibility to work with us to make their communities as crime free as possible. There are criminals who are doing serious crimes and they are not apprehended or charged because no one is saying anything," he said. "You are not an 'informer' if you say something if you see a crime; that would make you a good citizen."

Brooks said that the security forces have increased their presence in the troubled areas and are seeking to quell flare-ups.