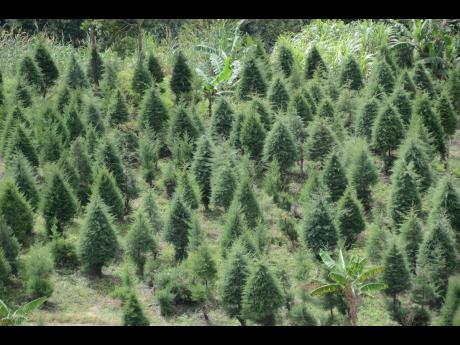 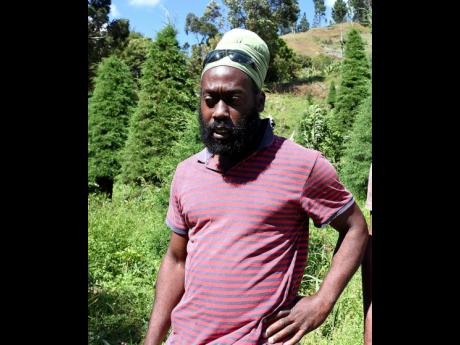 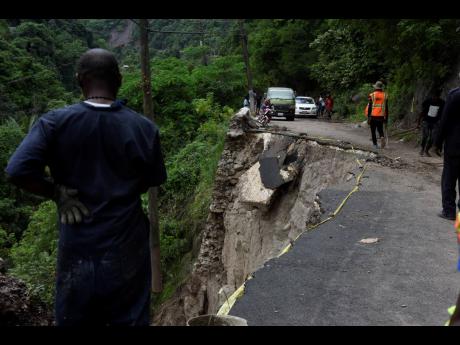 The Gordon Town main road, in the vicinity of Stand Up Hill, has been closed to all forms a traffic after a huge section of the roadway collapsed during heavy rains recently.
1
2
3

Alex Smith, 38, is a Christmas tree farmer who has been growing and selling Christmas trees for 15 years, following in his father's footsteps. The Epping Farm, St Thomas, residents have a Christmas tree farm in the Blue Mountains and have been delivering trees to customers over the years. But it has so far proven difficult and exhausting to do so this year, following the collapse of the Gordon Town main road in St Andrew earlier this month.

It would usually take Smith less than two hours to travel from Epping Farm, down through Hagley Gap and Mavis Bank, into Papine and later Kingston to deliver trees. The Gordon Town main road was an essential part of his route. But since the collapse of a section of the road during heavy rains recently, Smith, like other commuters, has been forced to use alternative routes to get into Kingston.

"I have to travel Guava Ridge, go up to Content Gap, come over to River Hill, go down through the soldier camp, come Irish Town, and come back down into Papine. That takes me like four hours to get to Kingston now," Smith told THE WEEKEND STAR.

"So, of course, that's more gas. One time you could do something is less time, and now it's taking more hours, so you a go need more gas."

The Savage Pen road is being prepared for motorists as an alternative to the Gordon Town main road, but for a truck driver like Smith, who carries load, that's not ideal.

"For me, Savage Pen is a no-no, based on the terrain of the road. That is a dirt track and it is very steep. Going up the hill, it rough. And the time wet now, so it's a lot of mud. If I'm coming back from town and going down the hill, it would be better," he said.

"Savage Pen would take less time than the route that I use, but it is harder to traverse," he added.

As he anticipates the peak week, he describes the road conditions as a 'serious hassle.'

"It's a major, major impact on us. We have to see how best we can cope with the whole situation, because the people need their trees and they are looking for us. So, we have to traverse whatever means necessary to get them out to our customers."

Smith said that the COVID-19 pandemic does not appear to have done much harm to the business, as he has detected an increase in the demand for Christmas trees.

"People started asking for trees early. I think we had to bring down about five trees already. Because of the pandemic, people who would travel abroad for Thanksgiving are still here, and there's no school and kids are home, so people are taking their trees and decorating a little earlier than normal," Smith revealed.