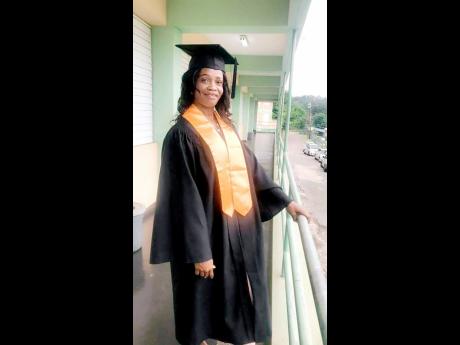 Striving for a career in education, she became a teacher's assistant, a role that served to fuel her passion and desire to become a teacher. But at 22, Fearon hit her first real hurdle. She got pregnant with her son and wasn't able to finish her teacher's assistant programme, which was being done through the then HEART Trust/NTA

"I became a stay-at-home mom, and then two years later I went in search of a job in St Elizabeth. I got a job at a grocery store and a bar, where I worked for six months. After that, I left for a small island ... . I went to Aruba and stayed there for eight years with my cousin," Fearon told THE STAR.

Somewhat unfulfilled, she returned to Jamaica in 2005. The next four years saw her operating as a vendor in the Charles Gordon Market in St James. And while she was fairly comfortable there, Fearon said that her spirit became dampened, and she was overcome by a strong urge to move on.

"After fear got control of me as criminal activities increased rapidly, I prayed night and day to find something else to do. Fear gripped me," she recalled.

At 34-year-old, she still didn't have a clear plan. Around that time, her father fell ill with stage-three colon cancer, and she relocated to Portmore, St Catherine, to assist her sister in taking care of him.

"He wasn't diagnosed as yet, but he was having symptoms and they were suspecting cancer. So, I went with him to do the different tests. It was emotional ... there were ups and downs."

But inexplicably, it was that experience that catapulted her on the path to achieve her goals. Having left Charles Garden Market in Montego Bay, she contemplated the possibility of a nursing career.

"That is where it all started," she said.

Things fell into place when she met an aunt who had visited from America and offered to help her get started. She says her younger sister also assisted and encouraged her to do a course in early-childhood education, which she believed was more marketable.

"My father's illness didn't stop me from pursuing my career. He did two surgeries, and after the last surgery he died.

While Fearon mourned, she dried her tears, jumped over yet again another hurdle, and started attending classes.

"I got into Webster's Memorial Skills Training Center at Half-Way Way Tree Road, where I obtained Level One and Two certifications in 2015. My aunt always encouraged me to have a plan B, which was to get mathematics and English language at the CSEC level," she said.

Years had passed, and there was a delay as she tried to get her degree. At 42-year-old, she says she was 'financially embarrassed.'

"At that time, my son was attending high school with no paternal support. My main focus was on him, and, presently, he is a second-year student at UWI."

But with the assistance from her younger sister, Nickesha Lynch, and aunt Advira Danvers yet again, she went back to St Elizabeth in 2017 and got enrolled in The University of the West Indies Open Campus in Junction, St Elizabeth.

Fearon is now a government-paid teacher at Red Bank Primary and Infant School.