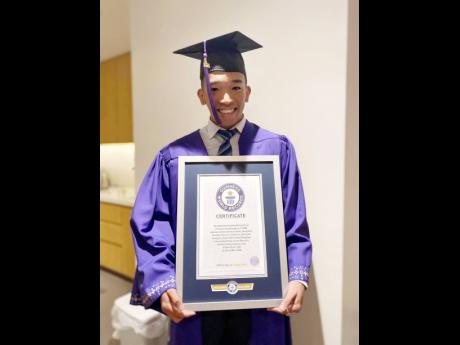 Jamaican Brandon Chin Loy and five of his compatriots have achieved a Guinness World Record for the most chest-to-ground burpees ever done in 24 hours.

Chin Loy, who is currently employed at National Commercial Bank as a data analyst, said that the team's record was achieved at a critical moment when countries around the world closed their borders with the advent of the COVID-19 pandemic.

The world record was set in Abu Dhabi, United Arab Emirates (UAE), on May 3 this year. Chin Loy, at the time, was reading for his Bachelor of Science degree in computer engineering at the New York University, Abu Dhabi. He and several students and staff members decided to undertake the challenge as a means of maintaining their physical and emotional well-being during the uncertain period.

The team, comprising members of the NYU Abu Dhabi fitness community, completed the challenge from their different locations in the UAE via the videoconferencing service Zoom, to facilitate social distancing.

He says the challenge was organised in relay format, with one person performing burpees for 10 minutes at a time.

"Once the 10 minutes were up, someone had to immediately start as soon as the other person stopped. This was done over a 24-hour period. We managed to set the minimum record (6,000 burpees) in about seven hours and then we went up to 16 hours to get the 12,502 burpees and that, ultimately, allowed us to set the record," he said.

Chin Loy said that the team was supervised by two witnesses to ensure the members strictly adhered to the rules for the challenge.

"They made sure that we were transitioning from one person to the other almost instantaneously. The witnesses ensured we were following those rules, as well as it helped with the adjudication process by Guinness," he said.