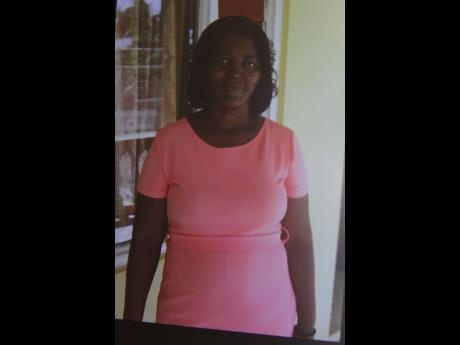 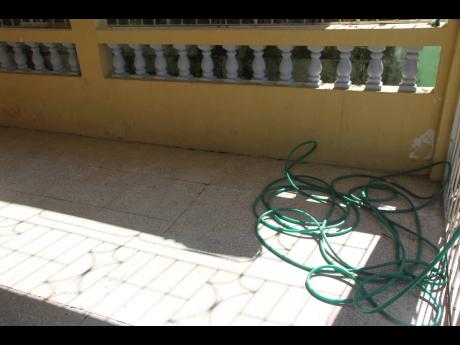 The hose used to wash away the blood of Janet Mundle-Reeves who was shot and killed on her verandah Wednesday night by unknown assailants. 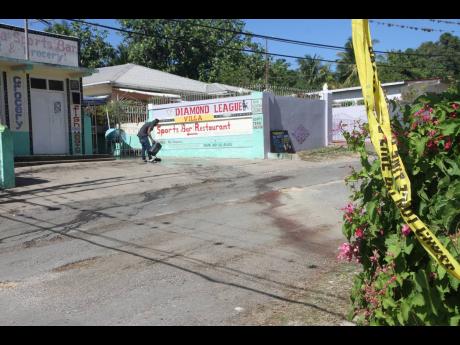 Michael Henry and Evriel Mitchell were killed by unknown assailants at this spot in Effortville, Clarendon, on Wednesday night. They died under a sign that read ‘Non Violence Zone’. 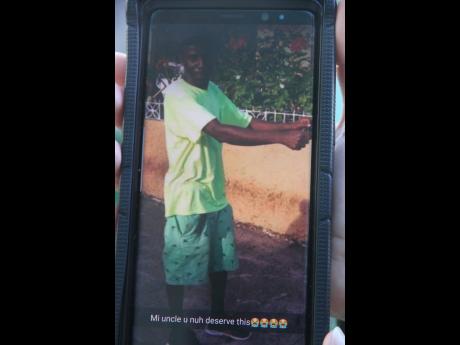 Five persons, including two women, were murdered in Effortville, Clarendon, in less than 24 hours, as cowards wreaked havoc in the tough community.

Six people, including a pregnant woman, were shot in three separate incidents on Leon Avenue and Alexander Avenue on Wednesday. Three of the victims, including a mother of three, succumbed to their injuries. By nightfall yesterday, there was another shooting, leaving a man and a woman dead.

Senior Superintendent of Police Glenford Miller, head of the Clarendon police, said that "From our indications, the double murder is a reprisal of the triple murder last night (Wednesday).

"A contingent of police and military personnel were deployed within the Effortville and Farm areas even at the time of the double killing since night (Thursday)," he said.

"We've always maintained a strong presence in the community and will be ramping up policing in the area."

According to Superintendent Christopher Phillips, head of operations in the parish, on Wednesday night, three men entered the community and started to ask questions about a missing bike.

"The first two men that were killed were accused of knowing where the bike is. The incident on Alexander Avenue, those persons were at their gate, and the three men came up and robbed the persons and asked about a bike," he said.

Janet Mundle-Reeves, 48, the mother of three, was killed on her verandah. The family had moved to the community five years ago.

Reeves' eldest daughter Rhonda told THE WEEKEND STAR that she was at her gate with her brother and a friend, when three men, one armed with a gun, approached.

"Me think a pass them a pass but by time me go through the gate the one with the gun come right up to me and say 'Gi me weh you have.' Me did have me phone and me give him and them take my friend's phone and money," she said.

"Him say him a go kill everybody fe him bike. Me not even know weh him a talk bout. The one with the gun come on the verandah and me hear mommy say 'a wah happen?' And him say 'tap e noise'. Then me hear the gunshot. Last night was the worst night a me life," said Rhonda, tears streaming down her face. She said the shooter reloaded but the weapon jammed.

"Me friend get up and run. The one weh tell me fe lie down tell me say me lucky and the three a them walk up the road," she said.

As of December 12, murders in Clarendon were down 18 per cent, or 21 fewer than the 116 people who were killed up to corresponding period last year.