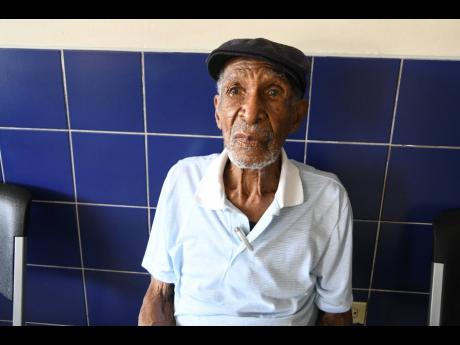 Centenarian Vincent Orlando Wilson is still sprite, even as his 103rd birthday is coming up in March.

Earlier this week, Vincent Wilson, a senior citizen, walked into the news team's offices seeking the signature and stamp of a justice of the peace.

He was assisted, but everyone marvelled when his identification card highlighted that he was almost 103. Many were convinced that based on his physical features, he would be around for the next two decades. He smiled as he explained how he had taken public transportation to take care of his business and would be making a stop at the market before heading home to Washington Gardens.

"I am going to the market. I live alone but I use to have a helper who comes to wash and so on. I also have a tenant. I don't cook any more but I buy food. I have a television and radio at home but it doesn't serve any purpose because I cannot hear so well," he said.

Wilson said he was born on March 27, 1918, and lived with his parents Ethel and Lincoln Augustus at 143 Spanish Town Road. He attended St Anne's Catholic School, but after that was purely self-taught.

"I taught myself to read and I still read a lot. I just don't do it at nights because I can't see the words clearly at nights. I worked for 44 years at the Shipping Association of Jamaica as a consultant and I have lived a nice life. Life has been good to me and I get a nice little pension that I can live off. I am not going to be ungrateful to God and complain," the centenarian said.

He wears a pacemaker but said he feels perfectly fine. He took THE WEEKEND STAR and his new-found admirers on an interesting trip down memory lane.

He stated that during his youth, downtown Kingston was the Mecca for Jamaica, quite the opposite of what the country's capital is today.

"King Street was the place to be and on Sunday, especially, you would just put on your best suit and take a stroll down the avenue," he said, noting that he especially loved the theatres and dances. Wilson said he also grew up in a time when classism and prejudice were rampant.

"My dad used to work three pounds per week and at that time it was a lot of money so persons respected him a lot. I grew up and interacted with the good, bad and the ugly but I never once adopted any bad habits. I never got arrested or anything," Wilson said.

He said he fathered two children, one of whom passed away several years ago. The other lives in New Jersey, USA. His two siblings and his wife also passed away years ago. But Wilson said he maintains an excellent relationship with his daughter and would usually travel overseas to visit but has been able to do so because of the current pandemic.

As for the deadly COVID-19 virus, Wilson said he believes it is a scientific experiment gone wrong.

"There are some scientists who believe that they are the Almighty God so they go around and experiment and it gets out of control and the virus takes over the world and starts killing people. We just have to protect ourselves," he said.