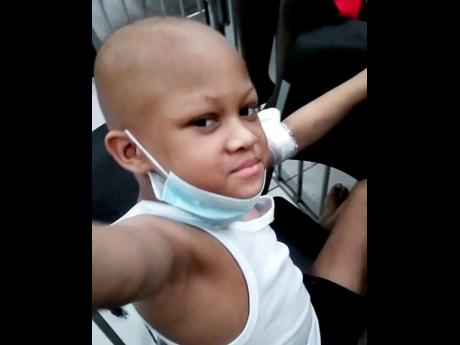 Five-year-old Andre Arnett likes to suck his thumb and enjoys watching cartoons, but currently the youngster's life is anything but fun.

Andre is a patient at the Bustamante Hospital for Children where he is battling a rare cancer, Burkitt lymphoma.

His mother Ofalia Wilson said he is urgently in need of a bone marrow transplant and other medical care that together cost US$ 3.1 million (approximately J$445 million). The Kitson Town, St Catherine, mother said she is seeking the public's assistance for her son to undergo the operation at the Memorial Sloan Kettering Cancer Center in New York.

"Right now he is currently in a lot of pain and his belly is swollen. The bone marrow transplant needs to be done as soon as possible because he just have one chemo session left," she said. "I have a GoFundMe page but I had just put US$1 million (the cost of only the surgery) because I didn't want to scare people with the figure." So far it has raised US$2,796. Wilson said Andre was living a normal life until last April when a pain started in his arm and then moved to his foot.

After painkillers didn't work, Wilson sought medical attention after he began complaining of stomach pains. He was then referred to the Spanish Town Hospital where he underwent tests and ultrasounds that detected a mass in his stomach. Further testing at Bustamante revealed his cancer diagnosis.

"He now also has leukemia as the caner has now spread to his bones. He now has stage three and four cancer. He began doing chemotherapy in June and it went away and they could not find any trace of cancer but in about October he had a relapse and the cancer is behaving stubborn. I am kindly asking for help and will be appreciative of every single dollar," said Wilson.