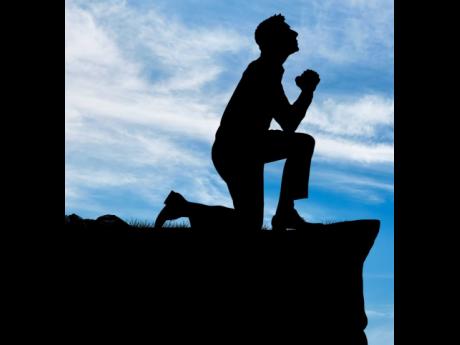 Horace Johnson, a former gang member who used to 'bun God', said he is imploring the youth to walk the straight and narrow and never allow the pressures of life to lead them into crime.

Now a born-again Christian, the 32-year-old said he first held a firearm at age nine, and a year later, became part of a gang that would commit several robberies.

"I also have relatives that were involved in wrongdoings so growing up I just always wanted to become a member of a gang. When my grandmother told me about God, I just told her straight say mi bun God," he said. Johnson, who is illiterate, said that the first major looting he participated in was during Hurricane Ivan when he was about 15.

"We robbed a business place and we got a lot of stuff, a lot of which were not of any value to me. It wasn't things that I really need because it was mostly cigarettes and liquor but we could make a money from them," he said. But the last robbery he attempted brought the change that his life sorely needed.

A gospel station we come across

"It was seven of us that decided to go on the robbery and we all had guns. We overload the station wagon but we didn't have any CD to listen so we start change di radio station and believe it or not is a gospel station we come across," he said. The radio host began to prophesy that a group of men going on a robbery would not be victorious and implored them to turn back from their wicked ways.

Despite the eerie coincidence, Johnson ignored it and they continued on their way. But minutes away from their destination, they ran into trouble.

"We saw a police just walk out and put up his hand for us to stop. Mi know say we inna trouble that time because di car overload and once a police see seven man, dem a go search. Mi tell mi self say mi affi go shoot mi way through so we press gas and continue drive," he said.

Johnson said the police gave chase and they managed to make their way along Constant Spring Road where they came across other cops and a shoot-out ensued.

He told THE WEEKEND STAR that he managed to escape but was shot in the back and leg. He ran into a church where persons took him back to the police, who then took him to hospital.

"I knew I was handcuffed to the bed but when I regained consciousness, I just heard myself shouting for Jesus Christ. Remember I didn't believe in God but I remember my doctor telling me that I was a miracle and I should baptise," he said. Johnson was found guilty of several charges including shooting with intent and illegal possession of firearm. He was sentenced to 17 years, but only spent eight. He was released in 2012.

"When I came out I backslided because times was hard so mi start smoke and drink, but mi never go back on any robbery or take up nuh gun. Mi baptise back last November and mi a go continue on this path. I will never turn back from God. My greatest wish is to learn to read and write and make sumpn of myself," he said.