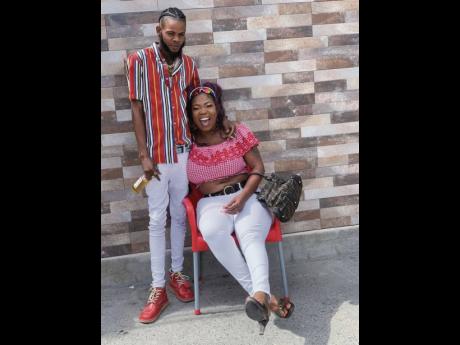 But the chemistry is clear as they lovingly make eye contact and laugh hysterically at each other's jokes. The newly engaged couple will tie the knot in April and, according to Queenie, no form of social media bullying would prevent that.

Queenie, given name Janese Espuet, said when she first met Dewy six months ago, the thought of him becoming more than a fan never once crossed her mind. Dewy had got hold of her number and texted her, making it clear he was interested. Queenie took it good-naturedly.

"When mi finally see him, mi and mi fren start laugh when mi si him cross di road and a say watch da mawga foot thread deh bout him a mi man," she laughed. However, Queenie said she instantly liked Dewy's spirit and instantly videoed a remix of her Double Tap and gave him to post on his WhatsApp profile. Queenie said the rumours soon began circulating that they were a couple. A smiling Dewy, 30, told THE WEEKEND STAR admitted that Queenie gave him the cold shoulder.

"When mi meet her, mi really wa tell her say mi wah be more than a fan and mi want a serious relationship with her but mi find it hard to say it because she never did a give me da vibration deh. Mi tell myself say mi nah give up because she a my own," he said.

Two weeks after they first met, Dewy reached out to Queenie again and this time, she took him to visit her mother who instantly liked him, which was a minor miracle as her mother is sometimes wary about strangers.

"Mi go a mi bed with him pon mi mind di night and mi still nah pree relationship. Mi just a wonder how mi mother like him suh," Queenie said. She arranged to meet Dewy at his home and while hanging out in his room, he turned on the TV and Double Tap came on. It was like a sign, and from then, sparks flew.

The couple started posting each other on their respective social media pages which brought hundreds of negative comments. Some accused Dewy of being a gold digger while others blasted Queenie about the age difference.

In October, Dewy told Queenie he wanted to marry her. It was a dream come true for the artiste.

"From mi young mi wah married so mi always try not to open any umbrella in di house. Mi and him go buy di engagement ring and him say him a go do it on mi birthday but a week before him say him can't wait to see di ring on mi finger and mi say 'engage mi now den'," she said. "Him go fi di ring and mi turn on mi camera and go live and den dem start cuss mi say mi hair wah comb and a bag a tings. But it wasn't a plan thing, everything come natural. The more people talk is di stronger we get."