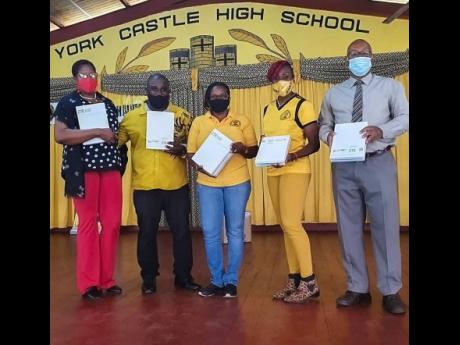 Principal of York Castle High, Raymond Treasure, has heaped praises on members of the school's alumni associations following a donation of more than 150 tablets to aid students who are doing online classes.

"Before the month ends, all students who were without (devices) should have because of this donation," Treasure told THE STAR.

Having access to devices such as tablet computers has become critical for students since COVID-19 forced teachers and students to online learning platforms. Treasure said that although the majority of the 1,395 students at the St Ann-based institution have access to the Internet, some were still facing difficulties because of the devices they were using to conduct their work.

"The truth is the majority had access but it was just that some were using cell phones. You can't really use cell phones to type essays because that in itself is a task," the principal said.

The tablets were purchased by the school's alumni associations following a fund-raiser in the form of a Zoom party. Of the 150 tablets handed over to the school, 100 will be donated to York Castle students, while the others will go to students from feeder primary schools.

The mother of Josiah Barclay, a 12th grade student who is currently preparing for his Caribbean Advanced Proficiency Examination papers, said that the donation means a lot to her son.

"Thanks a million for investing in the life of my son and by extension the nation. I am more than grateful. He was using a borrowed, second-hand laptop that has a defective microphone, which had to be plugged in when he used it. The microphone failed him twice while doing his online presentations so he is very appreciative of this device. He hasn't experienced any problem since he started using it (the tablet)," the parent said.

Jennifer 'Jenny Jenny' Small, president of York Castle alumni's Jamaica chapter, was pleased with the collective efforts displayed by the association's members here and in the diaspora.

"We are so grateful that for the first time in the history of the school we have been able to execute a joint event to secure tablets for students of York Castle who were not physically in class," she said.

"It is such a joy that we have so many students now ready for school online. York Castle, through this initiative, may retain its dominance and impact great scholars. We are energised to do more to keep the school spirit alive and to all who contributed we say, thank you," Small added.