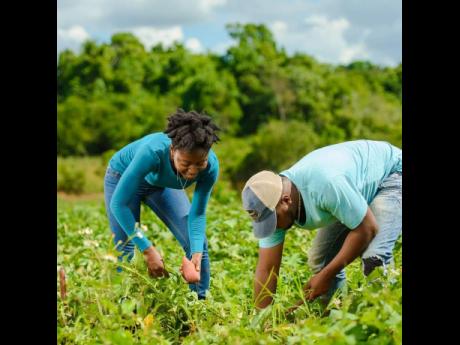 When contemplating her career path as a youngster, Citerina Atkins did not have farming on her list of options, but three years into her journey as a member of the agricultural sector, she is now an advocate for embracing farming as a viable career.

The young co-founder of Gerty’s Agro-Produce told JIS News that she started considering the alternative path of farming when she was approached by her cousin and now co-founder, Roike Campbell.

“My cousin presented the idea to me in 2018 and he showed me a young lady who was making strides and we started doing research and months later we decided on our first crop, and that was pumpkin,” she shared.

Shortly after embarking on her journey as a farmer, Ms. Atkins left her job at an insurance agency to pursue her new career full-time.

The New Hall, Manchester, resident said having recognised their lack of training in the agricultural field, they sought advice from organisations such as the Rural Agricultural Development Authority (RADA) and Jamaica Business Development Corporation (JBDC).

Ms. Atkins is one of many young entrepreneurs who have received crucial business development advice and training from the JBDC to facilitate formalising and growing their ventures.

“From the beginning of my farming journey, the JBDC was one of the first entities I approached to get advice and I have been working with them, and they always pointed me in the right direction as to what I need to achieve success in my operations,” she said.

According to the young farmer, having recognised the potential of agriculture as an attractive and economically viable career option, she is keen on helping to change the traditional perspective on farming.

“To ensure the success of our operations and agriculture as a model to contribute to nation building, we have to change the mindset and start introducing agriculture from the earliest stage, so that we can change the mentality of the youth from early, so they don’t grow up thinking agriculture is a dirty job and only for a certain set of people,” she explained to JIS News.

She also adds that increasing the number of persons in the industry, especially those with formalised operations, can lead to the agricultural sector contributing more to national development.

“Agriculture has played a part in many developing countries in boosting their economy. A country that can feed its people is on its way to something big. When we increase production, imports can be reduced and, therefore, result in a decline in the trade deficit,” Ms. Atkins said.

“We are looking to increase production to the full 20 acres. We are also looking at becoming climate resilient and we want to move into agro processing and exports. Crops such as broccoli, cauliflower and lettuce are also coming from us,” she noted.

The holder of a degree in banking and finance is encouraging young people to explore different opportunities in the agricultural sector when deciding on their career path.

“Be a part of changing the face of agriculture locally and also contribute to nation building, as this field has so many opportunities to capitalise on,” she noted.

Ms. Atkins is encouraging persons who are already in the industry to reach out to relevant organisations to research the different ways that they can grow their operations.

“I would recommend that farmers and potential farmers seek expert advice from places such as the JBDC and RADA, as these entities provide very good information to persons within the sector. So, reach out to them to ensure that you can supplement the knowledge that you have to facilitate your success,” she added.

The JBDC is the Government’s business development agency that assists in the sustainable creation and development of micro, small and medium-sized enterprises in Jamaica.

The organisation is leading the implementation of the Formalising Operators in the Jamaican Agricultural and Fisheries Sector project, which will enable 100 farmers and fisherfolk from across the island to receive training in enterprise development that will boost their exporting capabilities.

Applicants may also download the forms from the JBDC website at www.jbdc.net, www.miic.gov.jm and www.moa.gov.jm. The application period is February 22 to March 22.