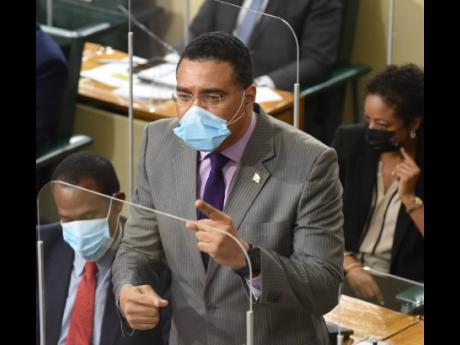 Jamaica's Prime Minister Andrew Holness yesterday used the floor of Parliament to lash aspects of the country's popular culture that he says are contributing to the high levels of violence in the country.

Holness said that entertainers often glorify violence in their songs and seek to justify their approach by saying they are reflecting the society's realities.

"In our music and our culture, in as much as you are free to reflect what is happening in the society, you also have a duty to place it in context," Holness said. "Dat yuh tek up the AK-47 and tun it inna a man head ... That is not right. And though you have the protection of the constitution to sing about it, you also have a duty to the children who are listening to you."

Holness was among several lawmakers who used yesterday's sitting of the House of Representatives to register their disgust about crime and violence, particularly against women and children, on the island. Gender Minister Olivia Grange read out the names of some women and children who have been victims of violence.

"It is on a sombre note and with pain in my heart that I stand to give voice to the now suppressed voices of our sisters who have been brutally killed in the epidemic of domestic violence in our country. Killed because some man felt he had the right to decide whom she should love or that she should continue in an abusive relationship, regardless. Killed because she did not have the physical strength to fight back, as, intimidated and threatened, she kept silence till the moment of her death," Grange said.

Protect our women and girls

There has been outrage in Jamaica since last week after the body of 20-year-old Khanice Jackson was found in Portmore, one day after she went missing. Robert Fowler, a 50-year-old mechanic, was yesterday charged with her murder.

"If we all cannot protect our women and girls, our most vulnerable, from such horrible acts of violence, how do we even see ourselves as a civilised society? At what point do we say enough is enough?," Grange asked fellow legislators.

The minister called on churches, civic organisations and men of good moral fibre to do more to help protect the nation's women and children. Like Holness, she said that entertainers and media practitioners have a very important role to play. Holness also said he would not be surprised if there are negative comments about his pronouncements, predicting that some would say he should "talk bout supme else". The prime minister lamented that Jamaica is not "yet serious" about tackling violence. He argued that the country is ambivalent about violence but what is required is a firm stance against all forms of brutishness.

"When we beat our children mercilessly, we are teaching them that the only way to resolve conflict is through violence .... When will we agree that the person's body is inviolable, meaning that I have a right for you not to touch me and that every woman has a right to say no?" Holness said.