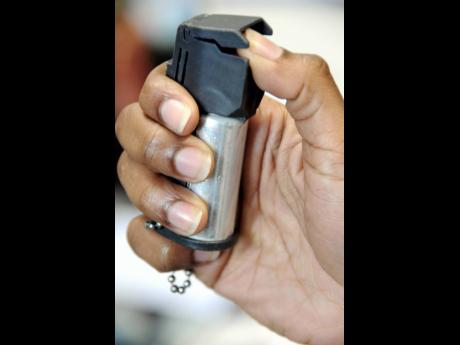 At least one person who sells pepper spray says that the demand for them has increased significantly over the past few days.

"I think with everything that is happening, females are just looking out for themselves so the pepper sprays are really going," said the woman, who suggested that the J$4,000 price is not a deterrent.

"The price is so high because of the method I would have to use to get them in the country which is very risky. But the price has never been an issue for persons though, once they feel the need they buy it," she said. There has been renewed discussion about the legalisation of the gadget following the abduction and murder of accounting clerk Khancice Jackson.

Opposition Leader Mark Golding has opined publicly that women should be allowed to arm themselves with the spray for personal protection. A petition was also launched on the Jamaica House Petition online portal to push for legislation that makes the sprays legal. Though the gadgets are still considered illegal, the supplier says importation is not much of an issue.

"Only if Customs decides to search and find them, we won't receive them. But that is rare and to be on the safe side, I don't advertise the product on social media because you never know who is watching. So what I do is promote by word of mouth by telling close fiends and they spread the word," she told THE STAR. "So my client base is mostly close friends and relatives and persons in their circle." She said that the idea to sell the gadgets came about in 2020 after her boyfriend decided to arm her for her safety.

"Immediately the idea came about to start selling the sprays because I really want to protect my friends and family and just women who are scared," she said. "I don't know why pepper sprays are illegal because anything can be a weapon, a fork, spoon or chair. So if someone can have something on them in the event that they feel threatened then why not? Crime and violence against women is at its peak and we are scared. So we have to protect ourselves and pepper sprays can help us to feel protected."