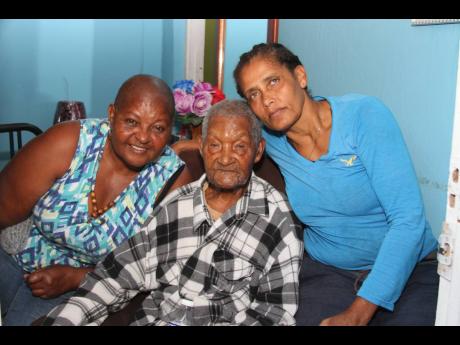 In this photo that was taken in January, Stephen Wright shares a light moment with niece Marcia Carnegie-Ramsamugh (left) and his and granddaughter Waldene Levy. 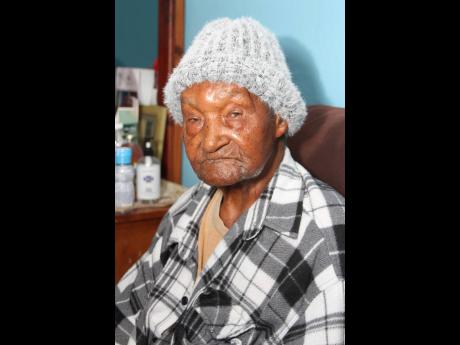 Stephen Wright, the man who is said to have been Jamaica's oldest person, died on Saturday at 119 years old. His family members, who are celebrating his life of selflessness, are hoping that the Government will relax restrictions on funerals and burials so that he can get a proper send-off.

Wright died peacefully at his home in Sanguinetti, Clarendon. His granddaughter, Waldene Levy, told THE STAR that she cannot even entertain the thought of any funeral right now as the COVID-19-induced funeral restrictions would prevent Wright from getting the grand homegoing service that he deserves.

"The community wants his body at the centre. Dem want a real funeral for him," Levy said. "Him a community treasure, him haffi bury good. Mr (Prime Minister Andrew) Holness, we need a pardon fi dat deh day dey," she added.

The Government has placed restrictions on funerals and burials. At present, until April 13, burials will be allowed Monday to Friday during the hours of 9 a.m. to 4 p.m. The time for burial must not exceed 30 minutes. Only 10 mourners will be allowed, with an additional five members of the officiating party - members of the clergy, gravediggers and undertakers.

Wright, according to the Registrar General's Department, lived until he was 109. However, Wright was always convinced that the Government's births and deaths registry got it wrong.

Secret to his long life

During that interview, Wright said that the the secret to his long life is found in the Biblical passage: "Honour your father and mother, so that your days may be long."

Levy said that the community is celebrating the life Wright lived.

"Mi grandfather live him life to the fullest and mi glad for it," Levy said. "Nobody nah mourn, everybody a seh celebration fi dis yah man yah. Mi tell yuh di truth, my grandfather, when him a work a one place call White Shop, and him a come down, yuh see every likkle pickinney a road, him a carry cane pon him shoulder, and one bag wid yam or something inna it. Every pickinney him pass pon di road, him stop, puh dung him bag, and peel di cane and him a split it and share it, straight till him ketch a him yard," Levy recalls.

Cherton DaCosta, who last visited Wright in 2013, remembers him as an ardent churchgoer.

"When I visited him last, he had just returned from a Seventh-day Adventist Church where he worshipped. He was well past 100 years old and he walked unaccompanied from his taxi for all of about 25 feet to his house. There he exhibited a spirit of happiness and was quite jovial. He spoke of his early years in Sanguinetti and how he was among the first to own a transistor radio," DaCosta said.

Wright fathered 10 children, three of whom predeceased him. Wright, a war veteran who fought in World War II, leaves behind seven children and, according to Levy, "too many grandchildren to count". He had several great- and great-great-grandchildren.