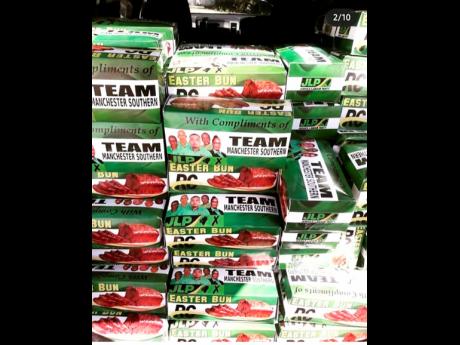 Some of the specially branded buns given out to residents of South Manchester.

Some residents in South Manchester are blasting the Jamaican Labour Party (JLP) representatives for handing out politically-branded Easter buns.

The boxes bore the pictures of the first-time Member of Parliament (MP) Robert Chin, and JLP councillors within the constituency.

"'It's disrespectful... Them could distribute the buns without the picture and logo on the box. That money could be used to buy some stuff and give care packages to the old people," said a resident of Redberry who requested anonymity. Another resident told THE STAR that many people are against the move, even some who collected buns.

"These politicians think that every little thing they do for and in the community must be broadcast like is politics do it. Them give you this or donate it, them want to paint it green or yellow or whatever colour they represent. We don't like it," he said. However, a resident of St Toolies said she had no problem with the branding.

"Right now I wouldn't mind if they send two more for me. I don't see anything wrong with the green on the box. If the other colour did on the box, I would do the same thing, just bless it and eat it. But you can't please black people. The MP and the councillor them a do them work, but people will always complain," said Vernetta Swaby.

Councillor of the Porus division Claudia Morant Baker, whose image was among those on boxes, said persons were given a choice to either have the JLP-branded buns or original branding.

"Our MP suggested this to us and as a team we work with our leader. Surprisingly, the people wanted the JLP-branded buns and some people were excited about it," she said. Several calls to Chin's phone went unanswered.