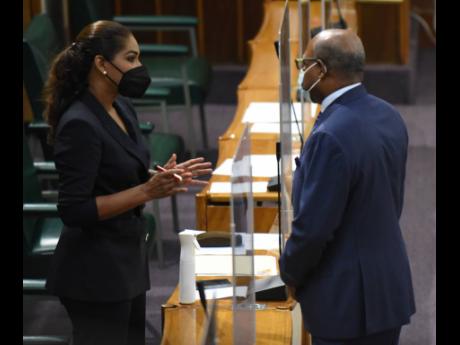 Tourism Minister Edmund Bartlett speaks with Lisa Hanna, Opposition spokesperson on the portfolio before the start of the Sitting of Parliament on Tuesday in Gordon House, Kingston. 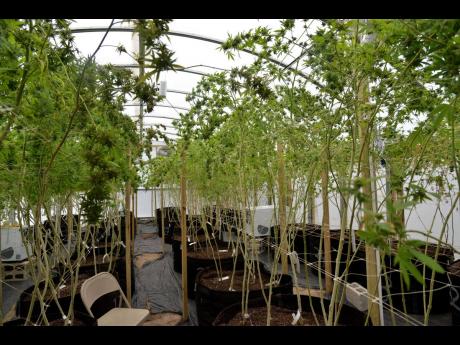 Member of Parliament (MP) Lisa Hanna has called on the Government to delay plans for the construction of a new parliamentary building, and to instead invest the money in setting up a ganja lab.

The Government is to spend US$50 million or J$7.5 billion to construct a new parliament building at the National Heroes Circle. This will replace the existing Duke Street facility which policymakers say is too small. Hanna, however, said a new parliament could wait.

"We don't need more space to be efficient and competent as parliamentarians. What we need is political will, research and time to go forward," the St Ann South East MP said.

Hanna, who was speaking in the sectoral debate in her capacity as the opposition spokesman on foreign trade, said that the global ganja/cannabis market is expected to reach US$97.3 billion by 2026 and Jamaica should ensure it is not left behind.

She said that the creation of a national agricultural facility, with a ganja lab component to allow small farmers to manufacture and process their raw weed, for a fee, into value added products, is what the world wants. Hanna said that a national ganja lab would drive the scientific research for cannabis and facilitate Jamaican nutraceutical products for export.

"We need to stand up for our brand," she said. "So many other countries are legalising this, and, therefore, by the time we get to it, it will be a commodity on the world market and we will not be able to guarantee the prices."