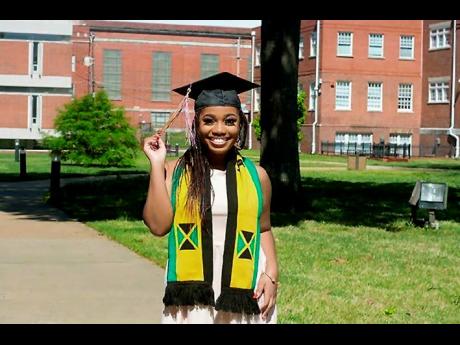 Sainna Christian, 23, is a history-making Jamaican, having been named one of three valedictorians of the LeMoyne-Owen College in Tennessee, USA.

Christian and two other women attained a grade point average (GPA) of 4.0, resulting in a tie for the valedictorian title, a first in the institution’s history.

Academic success, however, is not new to the Glenmuir High School alumna. She graduated with 20 Caribbean Secondary Education Certificate and Caribbean Advanced Proficiency Examination subjects with 14 grades ones and six grade twos. She was subsequently offered a full academic scholarship to pursue a bachelor of business administration degree with a concentration in accounting at LeMoyne-Owen.

Citing her journey to success as no easy feat, she spoke of several socio-economic challenges that fuelled her determination.

“My family isn’t rich, so there was generally an issue trying to figure out where money would come from to send me to school, [money] for food, etc. But things weren’t so tight that I had to miss school because of finances or had to go to bed hungry. Needs were always covered but wants weren’t entertained very often,” she said.

“The biggest challenge I had to overcome was to remind myself not to be defined by the environment I grew up in. I was not raised in the most ideal community, so it took a lot of work to ensure that I was not a product of what I’d see around me every day,” said the scholar who hails from Western Park in Clarendon.

Christian served as a student council representative who led one of the most influential protests on campus, which brought change to student governance at her college in the US.

She shared that amid being involved in a myriad of extracurricular activities, her studies were always atop her priority list.

“I was student government president, a peer tutor, I was volunteering and participating in internships, but I never forgot that I am first and foremost a student. I made sure that I was on top of my assignments and studying, and if I needed to say no to an event or two, I also did that,” Christian told THE STAR. “Keeping a strong GPA was important too, so that I could be competitive when I sent in my résumé for different opportunities.”

She also credits her family, lauding them as the motivation behind her success.

“I’ve seen the sacrifices that my grandparents and mom make and I recognise that I would not be at this point without them,” she said.

Speaking on her plans for Jamaica, she said, “I want to explore the root causes of economic disenfranchisement in Jamaica, and develop solutions which ensure the stability of our financial markets, while providing economic empowerment to the under-resourced and less-advantaged. I want to work towards a future where policymaking in Jamaica directly addresses the structural problems arising from economic inequality.”

Christian believes students are geared for success once they pursue their passion.

“Don’t choose what’s prestigious or what others want you to do. You become a lot better at your craft when you are genuinely passionate about it,” she said.