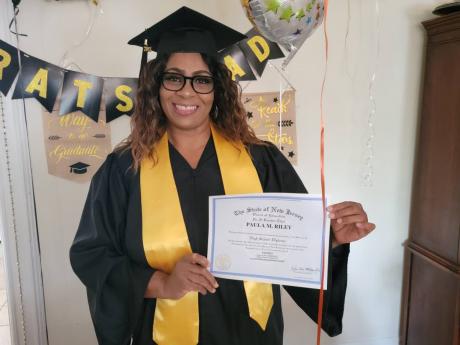 Listening to Paula Riley as she shares excerpts of her life story will leave one shedding a few tears of sadness and joy.

At age 53, the mother of seven recently received her GED (credentials equivalent to a high school diploma) in the US state of New Jersey, what she considers a massive accomplishment.

"I remember someone who was once close to me and very educated cursed me out and told me that I was illiterate and that was the reason I didn't want to go back to school because I knew I wouldn't pass. It was a dream come true for me and a big blessing when I did my GED in May and got my diploma two weeks later and got to graduate this year," she said.

Riley, who spent her earlier years in Three Chains in Mandeville, Manchester, failed both the Common Entrance Exam and Grade Nine Achievement Test. She had her first child at 17 and within a few years had three others. She then met the man who would father her last three children.

"That's when the hardship really began. I had to be visiting him back and forth in jailhouse and he was killed in November 2007. I was eight months pregnant at the time with my last child and I was hospitalised with pneumonia at the time. On the day he died, my father also passed away, so November 16, 2007 was a really stressful time for me," she said.

Riley stayed with her mother-in-law when her baby was born as there were rumours that her babyfather's killers wanted to hurt her and her children. Three days after giving birth, she lost everything in a fire. Despite some assistance from her sisters, the National Insurance Scheme and Food For The Poor, her burdens were still heavy. She even contemplated something drastic.

"The kids were sleeping and they didn't know this but the devil led me into the kitchen for a knife and I just remember that I just fell on my knees at the bedside that my kids were laying and I just started crying. I love my kids and I knew I couldn't hurt them," she said. Riley resorted to begging passers-by money to assist her in raising her children. But in 2009, a miracle happened. Riley entered the GraceKennedy Million Dollar Jackpot Competition and won close to J$6 million. She was able to build a house and make life much more comfortable for her children. She also donated some of the money to her church and loved ones. But the road to happiness was still bumpy.

"I went to embassy and I got a visa and I later told my children that I was begging them three years to make life better. A lot of the money from the winnings had been used up so we were back to struggling again. I went overseas and left my children with a babysitter and I began to search for a husband and met someone on a dating site and we got married in 2016," she said.

Despite marital troubles, Riley got her 'papers' in 2018. A year later she returned to Jamaica and took her children to the US.

"We lived in a basement before we lived in this big house. I will be restarting school this weekend to do a course in phlebotomy and EKG (electrocardiogram) training. After that I will be pursuing a nursing career so I am advising others not to give up and just put God in everything," she said.