Condoms and tampons contributed to flooding 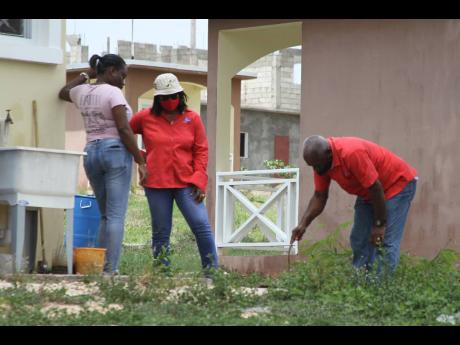 In the coming weeks, the communication department of the National Water Commission will be engaging residents of Longville Park Housing Scheme in Clarendon in sewage disposal best practices, as it was one of the big factors in some residents being affected by recent torrential rainfall.

Delano Williams, community relations manager for the eastern division, made the revelation during a tour led by Clarendon South East Member of Parliament Pearnel Charles Jr.

"We have a tendency to flush those solids, but wipes, condoms, tampons, those ought not to be flushed and we tend to get a lot of them," he said. Williams explained that wipes form 'rags' in the sewers, meshing together to clog manholes.

"What we found is that at the heavy intrusion of the rain water run-off from the roadway and also the siltation which has severely impacted the operations, we had to shut down and do extensive cleaning and also to do flushing," he shared. Williams also encouraged the residents to educate themselves on the proper disposal of waste as it relates to grease or cooking oil.

"We tend to pour it down the drains in the kitchen sink and oil and water don't agree. So when the oil cools, it forms hot logs which end up causing a narrowing of the pipelines," he informed.

Charles Jr said the day's tour was to look at some of the major challenges that the residents are experiencing following the torrential rain brought on by Tropical Storm Elsa.

He stressed the community's responsibility as he pointed out that many issues are not just "natural occurrences". "That's a discussion many don't want to have, but it's a reality," he said.